An old quasi-fanboy regrets the reception that John Carter's received 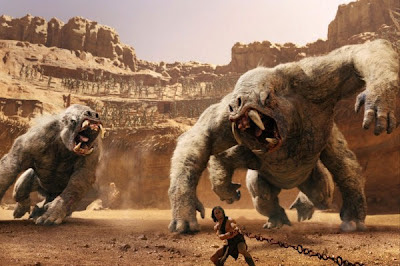 When I was a boy I devoured the Tarzan books of my fellow Chicagoan, Edgar Rice Burroughs. From Tarzan, I graduated to Burroughs' thrilling stories of dying Barsoom, of Captain John Carter and his beautiful Martian princes, Dejah Thoris of Helium. Burroughs could buckle some serious swash.

I don't know if I read every single one of Burroughs' Barsoom stories, but I read a bunch, and more than enough to catch the references and bouquets tossed Burroughs' way through the years by later sci-fi authors. And Burroughs inspired scientists, too: Carl Sagan, I learn this morning, had a poster-size map of Barsoom outside his office at Cornell.

A few years ago, I bought a compilation of Burroughs' Mars stories from Barnes and Noble and reacquainted myself with the stories. (Barnes & Noble will sometimes repackage and republish books that have finally fallen into the public domain. It took me awhile to figure this out.) I didn't feel cheated. I still thoroughly enjoyed the stories.

You can as well, and you don't have to pay for them: Many of the Barsoom stories are now in the public domain and available online for free download to your iPad, Kindle or Nook.

If the books were still being published -- and if they were graphic novels or comic books instead of actual books -- and if I were 30 or 40 years younger -- if all those things were so, I'd probably be considered almost a "fanboy" of the Burroughs series. (Fanboy, for those of you as old, or older, than I, refers to a certain type of juvenile who obsesses over some geeky series -- Star Wars, for example. It is often used in a derogatory sense, describing in particular one who greatly overdoes his affection, whose devotion to the fictional Obi-Wan Kenobi trumps any relationship he should have, or might have had, with an actual living human.)

I'm not taping any fake arms to my shoulder blades, nor do I plan to at any time in the foreseeable future, but I did watch the commercials for the John Carter movie with great interest and hope. I was encouraged by the fact that a Pixar veteran, Andrew Stanton, was directing. Pixar is another word for quality, as far as I'm concerned.

Thus it was that I eagerly opened Roger Ebert's tweet to his review of John Carter last Thursday.

And then I was disappointed.

He didn't hate it either, but he didn't recommend it.

I bought the Sun-Times Friday morning hoping against hope that he might have changed his mind for the printed review. (I'm not sure that real fanboys even know what newspapers are. Except maybe Superman fanboys, since Clark Kent still -- I think -- toils for the Daily Planet. Right?)

But Ebert didn't change his mind. And it was a busy weekend at home -- shortened by the time change on top of everything else -- and I couldn't get Long Suffering Spouse to come with me to see the show.

This morning I hear that John Carter made "only" $30.6 million this weekend, finishing second in the weekend box office sweeps to The Lorax. Because John Carter supposedly had a $250 million budget, this opening is being interpreted as not just disappointing, but devastating. John Carter is being compared to Ishtar in some circles.

Well, I still want to see the movie. And I hope it builds at the box office.
Posted by The Curmudgeon at 11:49 AM