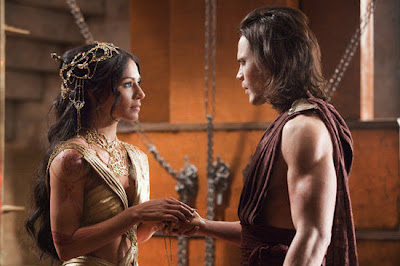 I persuaded Long Suffering Spouse to come with me to a matinee performance of John Carter yesterday -- you know, tickets $5 each before 5:00pm? (Look, I wanted to support the picture -- but I'm still cheap.)

John Carter had a 55% falloff this weekend from its already disappointing opening. It'll start disappearing soon, if it isn't already gone from your local mega-movie-multiplex.

If it by some chance remains at your local theater, however, I would encourage you to see it.

John Carter claims to be based on Edgar Rice Burroughs' A Princess of Mars -- and it is, sort of, in a very loose sort of way. It has been updated. The beautiful Dejah Thoris, Princess of Helium, is not so helpless as she was in Burroughs' novel; indeed, she's something of a Barsoomian career girl and warrior queen here.

In 1912, it was adequate for Captain John Carter to be overcome by mysterious gas in an Arizona cave or (later) stand, arms outstretched in the night in supplication, facing mysterious Mars, and be transported there by the power of his longing. The new movie provides a MacGuffin instead -- and an alien race of bad guys, neither Barsoomian nor Terran -- around whom a satisfying sequel or two might well be built. Or might have been built.

If you've re-read Burroughs recently in anticipation of seeing the movie, you may be disappointed: The plot departs wildly from the original. But I didn't find that objectionable. The names of the characters, tribes and cities are the same, and their characterizations (Dejah Thoris' martial skills notwithstanding) are not jarringly inconsistent with the source material, despite the new plot. I think the movie faithful to Burroughs, despite the modernizing touches, unlike, for example, the recent Robert Downey, Jr. Sherlock Holmes-channeling-James-Bond movies. 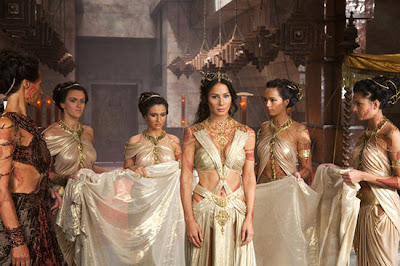 One key departure from the book -- but one I knew was more or less required: The beautiful Princess of Helium now wears more than jewelry.

And, ladies, you will be sorry to learn that John Carter arrives on the movie-Barsoom wearing his prospecting duds, not in his natural state as in the novel. (Things were not necessarily as staid in 1912 as we were lead to believe, were they?)

But the real flaw of John Carter is the marketing -- starting with the name of the picture. Does "John Carter" conjure visions of a mysterious dying world and exotic inhabitants struggling for survival? Is "John Carter" the name that sci-fi writers down to the present day have used when citing or alluding to Burroughs' Mars stories?

And what idiot came up with the idea of making the trailer look like a Western? Worse, a Western with a Marvel-Comics-type-superhero-riddled-with-angst lead? Somebody must have gotten this brainwave watching the commercials for Cowboys and Aliens -- and never thought to change a thing after that movie bombed.

There was too much backstory to suit me -- but I enjoyed John Carter anyway.

But she enjoyed it, too.
Posted by The Curmudgeon at 8:40 AM

Email ThisBlogThis!Share to TwitterShare to FacebookShare to Pinterest
Labels: Movies

It sounds like this could be one of Hollywood's biggest losses. The tityle sounds dreadfully dull.