Who knew that simplifying your life could be so complicated?

I've not mentioned my wife's house painting project for a while (prior mentions here, here, and here, if you're interested).

But what's the use of painting the house if you put the same dust-gathering piles of stuff right back where they were?

We tend to accumulate stuff. I'm certainly the worst offender. I had cancelled checks going back to 1980. The oldest were in a desk drawer. There was also a bag full of bank statements and cancelled checks that my wife had assembled when she couldn't stand looking at them stuffed into a bookshelf in the den. These probably went up to 2007 or 2008. The only reason we didn't have a pile of more recent cancelled checks was that, at some point, the bank stopped sending them.

I had books everywhere and magazines, too. I seldom threw out magazines. I mean, who ever threw out the National Geographic, right? And when I'd work up the intestinal fortitude to discard some other magazine, Long Suffering Spouse would say, "Wait! I want to see if there are pictures in there that I can use for class." Of course, that shouldn't have stopped me from throwing out the decades of back issues of the Wilson Quarterly -- not a lot of pictures that she'd want in there -- but the magazine is so good, I just couldn't bring myself to do it. So the shelves in the basement groaned under the weight of magazines and books and we also had bags and boxes of books and magazines piled up here, there and everywhere.

I had every t-shirt I'd gotten in college stuffed in a dresser drawer. I couldn't possibly wear them now, not even at home. I do not mean to imply that I am grossly obese, but I was a pretty skinny little runt 35 years ago and I have since thickened as males do when they leave behind their callow youth and embrace the full flower of maturity. But, darn it, I designed some of those shirts. On the other hand, the pants I wear every day that I can avoid wearing a suit were stacked up on a chair because there was no other place to put them. All the shoes I actually wear were in the middle of my bedroom floor because I couldn't bring myself to throw out the old shoes in the closet.

I had papers everywhere. Stuff I'd done. Stuff I was going to do. Manuals for appliances long since replaced.

There were piles of CD's everywhere, too -- old computer programs -- CD's or DVD's on which the kids might have recorded music or TV shows, or tried to. None of these CD's or DVD's were labeled; no one admitted to knowing what they were.

I didn't want to do it, but there was no choice: We had to simplify -- or we'd wind up like one of those hoarder families on a horrifying-reality TV show.

I inhaled deeply and threw out the shoes and the t-shirts. And still the world kept spinning. All those old checks got shredded. Out went the unknown discs. Out went the old computer programs. Out went boxes of 3.5 inch floppy discs -- and more than a few 5.25 inch floppies, too. I asked Oldest Son whether there might be a market for some of the educational games he and his siblings played as kids. He's got connections to eBay power-sellers; he would know. No, he told us, there's no market for Windows95 programs on 3.5 inch floppies that can't be loaded on any current computer -- so Reader Rabbit, Math Rabbit, and Treasure Mountain all went into the trash.

"Kids," I said at one point, "you don't know what a favor I'm doing for you. I'm saving you the cost of at least one dumpster after I'm dead." 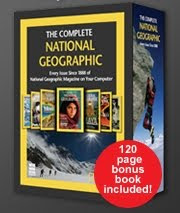 Younger Daughter said her college library would take some of the old children's books that we'd resolved to discard (don't worry -- we saved Dr. Suess and the other really good stuff for the grandchildren yet unborn) and that helped us with the painful necessity of clearing shelf space. But no library would take the magazine collections -- not even the National Geographics. (I've got over a hundred years of the magazine on disc. That helps salve the wound somewhat. But it's just not the same.)

The school's recycling bins were happy. I was sad.

Sunday, I went through 10 years of homeowner and auto insurance policies and kept only the forms and endorsements actually in force -- a foot of paper reduced to a half-inch. But there are still piles of stuff that must be reviewed. I'm not looking forward to going through the mound of cords trying to figure out whether some, or any, of these actually are needed by any appliance we currently have. Eventually, I'll rearrange those bookshelves. Next year -- maybe -- we'll rebuild them so they don't sag so.

I know, on one level, we are so much better off for having undertaken this process. Still... I'm deathly afraid we're tossing out something that would have made our fortune on next season's Antiques Roadshow....
Posted by The Curmudgeon at 9:24 AM

you are just the opposite of sarge, he tosses stuff immediately. he says if he needs something from the bank he can get a copy. everything is in the computer and he has that backed up. and i don't read magazines.

Thank God I didn't have your problem, my head probably would have exploded.

Throwing out back issues of anything is not easy.

It is really tough to do a no-holds barred purge. I am doing that myself right now so I know how it feels. I am really impressed with all that you accomplished though!