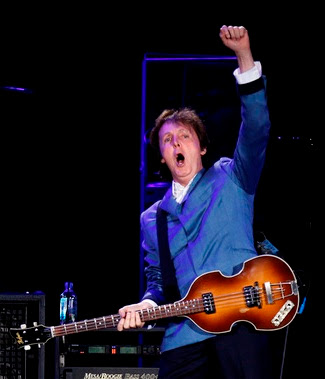 Middle Son lives in Wrigleyville these days; Sir Paul was just visiting, putting on a couple of concerts at Wrigley Field Sunday and again last night.

There has been no mention in the press as to whether Sir Paul saw any of the giant rats that Ozzie Guillen claims to have seen at that historic venue.

If the editor's note to Edna Gundersen's article (from the July 28 Chicago Sun-Times) can be believed, yesterday's concert was a special occasion: It was 51 years ago yesterday, on August 1, 1960, that the Beatles gave their first public performance in Hamburg, Germany. Of the members of the group appearing on stage that night, only one besides Sir Paul is still alive. Do you know who that person is? (Answer at the bottom of the post.)

Middle Son texted me last night: "I can't believe you're not in Wrigleyville tonight -- it's nuts how many people have been here the last two nights." (The spelling has been corrected and abbreviations expanded, of course.)

It's not the first time Middle Son has seen Boomers trying to recapture their lost youth. In his college days he was obliged to work as an usher at a Rolling Stones concert at Soldier Field. He said he got a contact high from all the greybeards' doobies. He was both shocked and amused at the sight. I couldn't help but hear my father's voice ("you kids think you invented everything -- Gene Krupa went to jail for smoking that stuff in 1943!").

How's that for a noisy course in American musical history?

I admit: I wouldn't have minded going to Wrigley for a McCartney concert. Had I the disposable income, I might have tried to cadge a vistor's parking permit from Middle Son. Maybe next time....

ringo was my favorite, i thought he was so cute.