For want of a nail.... an Unscientific Survey about how we got in this mess

This morning the United States finds itself with its credit downgraded by Standard & Poors and the stock market is reacting just like startled sheep: running blindly in almost any direction. The markets are hemorrhaging. My Facebook news feed is lighting up with persons lamenting the loss of their retirement savings -- again.

Now, if you're inclined to maintain some perspective, you might realize that Standard & Poors is only one of three major credit ratings services. The other two, Moody's and Fitch, have maintained the United States' top rating, Moody's reporting today (per this Bloomberg News report) that, because of the American dollar's unique as a reserve currency, "the U.S. government can support higher debt levels than other governments.... Over time, the dollar’s role may be eroded, but we see no immediate threat."

Still, this is not a time for us to rest on our oars. Standard & Poors has fired a warning shot over the nation's bow: We'd better get our financial house in order.

In yesterday's Chicago Tribune, columnist Steve Chapman wrote that the recent FAA shutdown was caused by the Senate's unwillingness to go along with cutting a part of the Essential Air Service initiative, a federal subsidy for commercial air service between smaller cities, that was enacted in 1978 and was only supposed to last 10 years while the airline industry adapted to deregulation.

House-passed legislation providing funding for the FAA proposed to cut only $16 million of the $200 million program, eliminating subsidies for service to 13 cities, subsidies that can amount to thousands of dollars per passenger. In a time of debt crisis, a reasonable person might think that this would be an easy cut to make. But the Senate would not accept it, and the partial shutdown of the FAA followed. For Chapman, this illustrates the difficulty of making real cuts in the federal budget: "You can't cut the big stuff because it's too important. And you can't cut the small stuff because it's not worth the bother."

This is a fine fix we've got ourselves into as a nation. But the kingdom is not yet lost. The rider may even still be on the horse.

The question is this: Can we figure out what nail was omitted from the shoe? What chain of events has led us to this stalemate?

All of American history is yours to mine as you create your theory. If your explanation gets too long, make it a post on your own blog and leave a link in the comments. Let's start a discussion here, people.

And, in the spirit of getting the ball rolling, here is my hypothesis. Naturally, there's a Chicago angle.

In the aftermath of the unhappy 1968 Democratic National Convention in Chicago and Hubert Humphrey's subsequent loss to Richard Nixon, the Democratic Party set up the McGovern-Fraser Commission to reform delegate selection processes. One memorable consequence of this commission was that the elected Illinois delegation controlled by Chicago Mayor Richard J. Daley's was challenged at the 1972 Miami Beach Convention by an unelected bunch led by maverick Ald. William Singer and the Rev. Jesse Jackson. 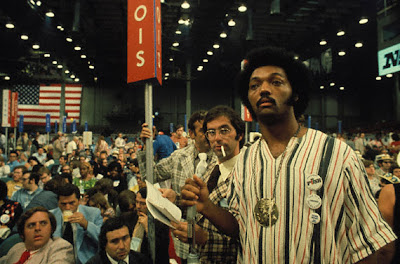 The stated reason for knocking out the duly elected delegates was that the Illinois delegation did not include an adequate proportion of women and minorities. The credentials committee agreed and the uncommitted, but duly-elected, Illinois group was thrown out in its entirety (including the duly-elected women and minority delegates) and the Singer-Jackson group (which was pledged to Senator George McGovern) was seated in its stead.

It made for great television; I remember staying up until 4:00am to watch.

But the 1972 Convention debacle was just the beginning of the mischief caused by the McGovern-Fraser Commission reforms. That Commission, I think, was the nail.

Even the linked Wikipedia article acknowledges, "One of the unintended consequences of McGovern-Fraser reforms was an enormous surge in the number of state party presidential primaries."

Primaries are huge business in the United States these days -- and extremists control the primary process in both major parties. The extremists are not just nominating presidents, they are nominating candidates all the way down the ballot. The state legislators who draw the new legislative maps are survivors of this process. And maps have been redrawn now three times since (and a fourth is upon us).

The insidious practice of gerrymandering was named for Elbridge Gerry, a New England Patriot who served as James Madison's Vice President. So the drawing of partisan maps is nothing new. But the map drawers are. And so are the computers that aid them in their polarizing task.

Of course, we can't put the nail back in the shoe the way it was originally -- and we shouldn't want to: Women and minorities participate in both parties now and that's a good thing. Besides, the health nuts would go crazy at the thought of any return to smoke-filled rooms. So my solution is open primaries. I want people to vote for the Democratic and Republican nominees in all races. I think this would have a generally moderating effect on the political climate -- and the persons emerging from such a process might be able to make the decisions necessary to provide the real reforms our beloved country so desperately needs.

That's my suggestion. What's yours?

But the bill also includes language that gives Transportation Secretary Ray LaHood the authority to continue subsidized service to the 13 communities if he thinks that it is necessary.

Lowy reports that the Democrats expect that Secretary LaHood (a former Republican Congressman from downstate Peoria, Illinois) will dutifully find that all of these subsidies are necessary after all.
Posted by The Curmudgeon at 11:48 AM

Email ThisBlogThis!Share to TwitterShare to FacebookShare to Pinterest
Labels: Roadkill -- politics in the middle of the road, Unscientific Survey

Your nail sounds good, I'd put a recent peg at the rise of the corporations' influence on politics, and another at Citizen's United. A peg for our fear of what's happening to us and willingness to believe the lies we are told goes back some decades. Beyond that, I'll punt.