Not to decide is to decide: About this debt ceiling "deal"

My mother-in-law will breathe easier this morning, at least: Her Social Security payment will come this month as scheduled.

"It will come regardless of what Congress does, or doesn't do this weekend," I tried to tell her Saturday, but she would not be consoled. 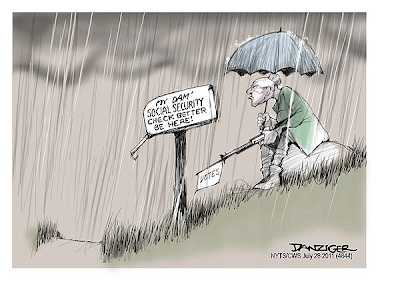 That brief conversation really showed me just how accurate was this Jeff Danzinger cartoon.

Long Suffering Spouse commented this morning that nothing in this deal seems to address the issue of jobs.

But I rebuked her: Clearly Congress is very concerned about jobs. All 535 of theirs.

The important thing is we now have a deal (pending some last-minute glitch, like the Tea Partiers and "Progressives" in the House joining forces to scuttle the whole thing).

And the deal is this: The government can borrow some of the money Mr. Obama wants to borrow right away -- and we'll continue to disagree about how, when and whether to pay any of it back.

The centerpiece of the "agreement" is that a 'super-committee' of Congresspeople will be formed, composed equally of Democrats and Republicans. They must report to the nation by late November, and Congress must act on their report by Christmas Eve in order to trigger the other incremental debt ceiling limits.

Christmas Eve. How appropriate. Only people who believe that Santa really is a jolly fat man in a red suit, sipping Coca-Cola at the North Pole, will believe that a single report will ever be issued.

The Democrats on the Committee will argue for tax increases ("revenue enhancements" and "closing loopholes") which the Republicans will absolutely refuse. Then the Republicans will propose cutting various social programs, which the Democrats will absolutely refuse ("you're trying to balance the budget on the backs of the poor!"). Then someone will say that we'll have to cut Social Security (which, finally, will unite the committee -- they will bravely oppose anything that might get seniors angry at them) or the military (an idea that might get some traction until the Republicans realize that defense contractors might be hurt and the Democrats realize that the Republicans are trying to hamper the President's conduct of foreign policy).

No, I'm not optimistic. Every spending program, no matter how futile, has a constituency (even if it's only the bureaucrats who administer it) and a high-sounding purpose. Every special interest group now has several months to rally support for the survival of their pet programs.

The only way out of this mess is for the President to use his "bully pulpit" to build public opinion in favor of the hard choices that must be made. He could start by dusting off the last special commission report. But Mr. Obama will not do this. Whatever his other virtues may be, Mr. Obama has shown himself to be the delegater-in-chief, trusting Congress to figure out how to lead us out of this mess. This is what he did with health care, too. He seems unable to grasp that Congress will only bravely lead down a road that has been fully paved with favorable public opinion.

Or is that too harsh?
Posted by The Curmudgeon at 9:43 AM

Very good post. I think the Tea Party is the real winner here, even if they vote it down. The fact is without them we would not have had this experience, it is time for Americans to look at what our government is doing to us.

It's a matter that everyone has a different opinion.

social security is NOT an entitlement!

why borrow money to give it to other countries?

why not hire people to rebuild our crumbling infrastructure? puts them to work instead of welfare?