We took Youngest Son up to school yesterday at a place I'll call South Janesville College in North Rockton, Wisconsin. Don't bother looking either up in Wikipedia. Plausible deniability is one of the great traditions of serious anonymous blogging.

South Janesville College is situated near the Rock River in southern Wisconsin, convenient to the Interstate, which is certainly a tribute to the foresight of the college's founders. In the 1840's most folks did not make plans with the Interstate in mind. 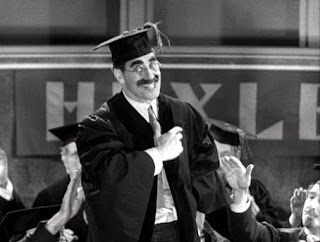 The college is old and enrollment is small, particularly when compared to the powerhouse educational conglomerates of the Big 10 (which now has 12 schools -- and they wonder why Americans are failing at math!). Still, the school has a large campus, and it dominates the small town around it. At a place like SJC, the liberal arts still flourish. Quincy Adams Wagstaff might not look too out of place striding across the campus -- except for the cigar, of course. The serious scholars of SJC would no doubt be horrified at the death penalty, but they might be willing to overcome their horror were someone to light up a stogie in their midst. This is 2011, after all. We did not take the boy back in time.

From the time he sent in an acceptance (and after I sent in $500 as a pledge of good faith), Youngest Son was deluged with mail from South Janesville College -- big envelopes, small envelopes, chatty postcards. He'd get phone calls and emails, too. Some of the SJC correspondence was addressed to Long Suffering Spouse and myself, but these were all solicitations to buy something or other and these were all promptly tossed. We relied on Youngest Son to tell us what we needed to know to get him properly prepared for the semester.

Now, as a rule, 18-year old males don't talk much to their parents, and our Youngest Son has proved no exception. He'd occasionally share bits of information from his college mailings -- bits as in bits and bytes, the teeny-tiny units of data that are regularly used by computer geeks. We knew that the phone calls were from his baseball coach, for example. But we did not know whether his dorm room would have a dresser or a closet or a desk or shelves or some combination of these dorm-room basics. Would the room be air conditioned? (We assumed not, given the age of most of the buildings on campus.) He did let us know when roommates were assigned, and he informed us that he'd opened channels of communication with said roommates -- both of whom, apparently, were (1) planning to play baseball also and (2) equally ignorant on the likely contents of their dorm room.

Recently, Long Suffering Spouse tried to wheedle information out of the boy concerning the academic calendar. We knew he moved in on August 22. The first day of class is next Monday; registration and orientation fills out this week. But was there a Fall Break? How many days did he have for Thanksgiving? When would he have to leave campus after first semester finals? My wife likes to know these things. She has, I think, good reasons for asking. Does she have to plan another day off? (She missed the first day of school yesterday.) She keeps the family calendar. She'd like to know what's ahead.

Long Suffering Spouse, in fact, had a host of questions for Youngest Son, and he was equally uncommunicative with regard to all of them. Nevertheless, somehow, Youngest Son packed, making piles of stuff in the living room. He even made it to Indianapolis, finally, to pick up the refrigerator that his sister was keeping for him.

The car was loaded Sunday night. Monday morning we tried to get out of the house before the height of the rush hour (in Chicago, rush hour traffic goes from as much as to the city). But the boy couldn't find his wallet. It was left in the other car when he and Younger Sister went to pick up a new pair of hair clippers from a 24-hour Walgreen's in the wee small hours of Monday morning. (Younger Daughter was giving her brother a haircut when the old clipper failed.)

Though the wallet crisis was successfully resolved, Long Suffering Spouse had to practically lead the boy out of the house, if only to stop his seemingly aimless wandering from room to room.

The four of us (yours truly, Long Suffering Spouse, Youngest Son, and Younger Daughter -- she wanted to see what SJC looked like) made it to North Rockton without incident and, after some confusion, found a legal place to park within arguable walking distance of Youngest Son's dorm.

Youngest Son's two roommates and their respective families also arrived at the same time. We got everything from the car into the dorm -- why are my kids always on the top floor? -- also without serious incident.

But conflict was predictable as all of these strangers converged on the dorm room and, in this case, the conflict involved a pair of shorts. A pair of short, form-fitting shorts worn by the mother of one of Youngest Son's new roommates.

America is an increasingly casual country, and it shows in what some people will wear in public. Our politicians are no longer obliged to wear ties, especially on the stump. (As recent events have shown, we still expect our politicians to wear shirts. And pants.) Even fancy restaurants will seat patrons without ties -- or even jackets. Americans have Casual Fridays all year round and Summer Casual all summer long. Even lawyers will come to work in 'business casual' on days when they will not appear in court. And stop at any grocery or Wal-Mart and you're likely to see people, usually women, parading about unselfconsciously in stretchy materials that leave little to the imagination.

When a female parades about in a form-fitting costume, all males are obliged to look. This is not because we are all dirty old men, or dirty old men in training, and certainly not because we are seeking to commit infidelity at the slightest opportunity. Rather, this is an illustration of evolution in action; it is an undeniable instinct that harkens to the earliest origins of the human race. If this were a PG-13 blog I might make some sort of snickering reference to how it's no accident that homo erectus was a direct ancestor of homo sapiens -- but I'll leave that sort of humor to prime-time television.

The usual male response to seeing a female in stretchy garb is shock, horror, and revulsion -- not because we are such prudes, you understand, but because, all too often, the person wearing the garment really shouldn't. It's like looking a train wreck: You know you should turn away, but you can't. The sight of rippling folds of flesh, held in place beneath the stretchy stuff like waves on a lake that froze on a windy day, burns the retinas of your eyes, and still you stare, unblinking, wondering what was she thinking going out like that?

On the other hand, the woman in the crowded dorm room at SJC actually could wear short tight shorts. Whether or not the occasion was appropriate for such a costume, her derriere was. She was tall, thin, tanned and had long legs that nicely complimented the aforementioned shorts. With a son starting college, she must have been in the neighborhood of 40 -- but it was obvious she lived in the good part of that neighborhood. Her hair was of that blond, brown, and every-shade-in-between variety that Younger Daughter could explain very easily -- there's a name for that -- but I don't know it. What I did know was that Long Suffering Spouse took an instant dislike to this woman. I thought that was what made the room seem chilly, but it turned out that it was actually air conditioned.

The room also turned out to have beds and dressers and bookshelves and desks and closets for each of the boys. But the beds seemed to be blocking all the available electrical outlets. Major furniture moving was in order and I was all for letting the boys work this out themselves -- but if that woman was staying, Long Suffering Spouse was not budging. Since that woman stayed, Long Suffering Spouse did, too.

Believe it or not, I removed myself to the lounge just down the hall from the boys' room and checked my messages at the office.

I managed to avoid becoming embroiled in that conversation.

But I'm not certain that I would have agreed that that woman was being creepy. And if she was trying to be provocative, it was probably in vain. Although there have been any number of recent references in popular culture to "cougars" and so forth, I suspect that, for most 18-year olds, anyone north of 35 would be unimaginably ancient. I concede that I enjoyed the view... but I was merely looking, not looking for trouble. My best guess is that that woman only dressed that way because it was warm out.

Eventually, though, enough furniture was moved that the ladies felt it possible to leave the kids to set up their room, and their schedules, on their own. Long Suffering Spouse, Younger Daughter and I made it home -- and it was when we were cleaning out the van from the trip that the discovery was made.

It was a small book, maybe 4" x 6" -- and no more than 30 pages long. It was entitled Everything You Need to Know Before Arriving at South Janesville College. Long Suffering Spouse remembered seeing that book before; she'd actually seen Youngest Son consult it before, on one of their few shopping expeditions. She knew, therefore, that it contained some useful information. She took it inside.

After dinner, Long Suffering Spouse began reading the book -- and I could see her becoming increasingly agitated with each turn of the page.

Every question she'd asked the boy in the last month was answered in this book. I know this because she read it aloud to me off and on all night long. She'd remember some other question she'd asked Youngest Son, then she'd remind me of her prior query, and then she'd read me the answer the boy could have given her -- had he looked at the book -- but did not. I think I was quite patient until she read me the part that says that Visa cards could not be used for tuition payments. I'm still mad about that. And even the magic answer book didn't explain why Visa would not be accepted. Or why college students don't read.
Posted by The Curmudgeon at 9:54 PM