Curmudgeon gets a plug, learns something new

It's not a book contract; it's not even a paying gig. However, from time to time, Jay Harrison, the proprietor of BoomSpeak sees fit to reprint one of my posts (edited by Mr. Harrison to suit his needs).

In the current edition of his Internet magazine, Mr. Harrison reworks my December 20 piece, "I spent much of last week looking for the electric bill" and distills it down to "Electic Boogaloo." I'm grateful for the plug and the link. And who knows? Maybe one of these days we can drive serious traffic to each other's sites.

Also in the current edition, BoomSpeak features an article by Terry Hamburg, "Inside Gilligan's Island." Hamburg, whose regular blog is boomer to you, reveals who almost got marooned on the island. I won't steal her thunder by revealing the identities of those who were considered for, but did not get, parts in the show. However, Hamburg also reveals that Gilligan's tiny ship was named for a famous Chicagoan.

In this morning's Chicago Sun-Times, Michael Sneed writes that Newton Minow will receive an honorary degree from John Marshall Law School at that school's commencement ceremonies Sunday at the Sheraton Chicago Hotel & Towers. Minow is of counsel to Sidley & Austin -- and his daughter Martha is the Dean of Harvard Law School -- but you will probably remember Mr. Minow best for a 1961 speech, soon after his appointment as Chairman of the FCC, in which he called television a "vast wasteland."

All this time, I just thought the boat was simply named for the small fish....

A careful search of the Internet, however, reveals this photograph: 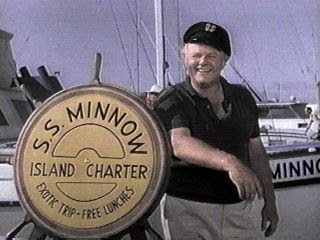 It makes an interesting story either way.
Posted by The Curmudgeon at 8:33 AM

You'll note that the name of the boat is actually spelled S.S. Minow, as Mr. Minow's name, not like the fish....