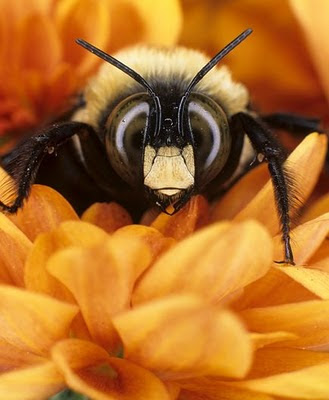 Scientists are buzzing about a dramatic decline in American bumblebee populations.

National Geographic (from which the accompanying image was taken) and AOL both have posted stories this week about a recent study reported in the Proceedings of the National Academy of Sciences which claims that several species of American bumblebee have declined by 90%. A killer fungus is suspected as one possible culprit for the die-off, as is lack of genetic diversity (read: inbreeding).

Believe it or not, global warming is not identified as a reason for the decline because some bumblebee species are flourishing even as their cousins are buzzing toward extinction. Humans may still be to blame, however, because the killer fungus is even worse in Europe -- and European bees were imported to California in the early 1990s, right before the population plunge began.

Somebody may have brought in some sick bees.

When I first heard about the population crash my first thought was that perhaps bumblebees had finally been revealed as imaginary creatures. Once we realized that bumblebees don't actually exist, sensible people should no longer see them in their gardens. Why would I think bumblebees to be imaginary? Well, I remembered reading many years ago that science had 'proven' that bumblebees could not fly.

Turns out, though, that the story about bumblebees inability to fly was just another example of faulty science reporting.
Posted by The Curmudgeon at 10:04 AM

Email ThisBlogThis!Share to TwitterShare to FacebookShare to Pinterest
Labels: News and Views, Science