We're No. 1! In traffic congestion, at least

With the Bears playing the Packers Sunday for the NFC Championship, it's hard to find anything in the Chicago newspapers or on TV or radio except breathless pre-game coverage. Every saloon in Green Bay is being visited by accredited Chicago media; every one of these joints is pronounced "historic."

World War III probably couldn't crowd the Bears game off the front page here -- unless, perhaps, Dallas was vaporized in the initial nuclear exchange. Then, however, the headline would most likely read, "Super Bowl must be relocated; NFL asked to consider Soldier Field as new venue."

But I was able to find reference today to Chicago earning a no. 1 ranking in something other than pro football hype and, unfortunately, it's a dubious distinction: Chicago ranks worst in the nation in traffic congestion.

The story is based off a study issued by the Texas Transportation Institute, the 2010 Urban Mobility Report. If you turn to page 28 of the report, you'll find this table (click to enlarge or clarify): 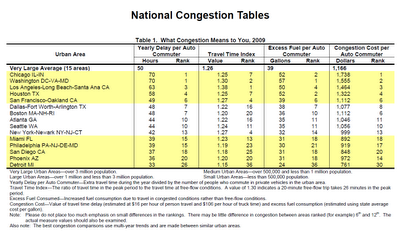 What it comes down to is this: Chicagoans who drive to work waste more time behind the wheel going to and from work than just about anyone anywhere. And then we pay a king's ransom for parking.

I'm actually surprised that Chicago fares so poorly in these rankings. Washington D.C. I could understand: Gridlock is the state of nature there, isn't it? I have never actually been in Washington D.C. -- but I was on the Beltway one time, at 3:00am, and traffic was at a standstill. In Chicago, we can get around pretty quickly on the expressways at 3:00am. If only at 3:00am.

And we were recently no. 1 in gasoline prices, too. Whether we still are or not, I don't know. AAA says the current national average price for regular unleaded is $3.115. I paid $3.35 to fill up the family van yesterday (I had court in the suburbs). Most gas stations around my house are selling regular for $3.39; one of the stations right off the Kennedy at Harlem posted a price for regular of $3.45 this morning.

Thank goodness we have the Bears and a mayoral election to keep our minds off of real problems.
Posted by The Curmudgeon at 10:13 AM

Atlanta dropped to seven from three in the survey. Gas here is as cheap as $2.94 per.

And our politicians would die before they'd raise the income tax (though they don't have the same aversion to "fees").

I paid $2.70-something for gas last week. But I also used the gas station at the grocery store I shop at, so I used points I had accumulated. I think the regular price was probably in the $2.80's, still less than you.