Something else to worry about: Too much 'screen time' may cause heart diesase 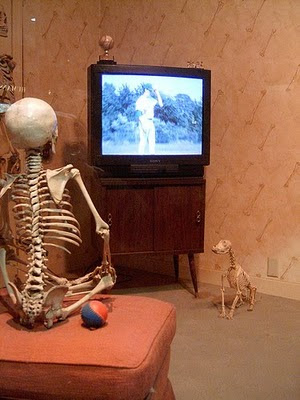 Just two hours of watching TV or other "screen time" a day can result in an increased likelihood of heart disease and early death, according to a new study reported in the Journal of the American College of Cardiology.

Yahoo! News carries the AFP's January 10 article on the study, which was compiled from "data from 4,512 adults who took part in the Scottish Health Survey of households."

I'm not sure exactly how many years are lost per hour of screen time, but given my habits, considering I'm frequently watching two screens (a computer and a TV), by my rough calculations, I must have died about a decade ago.

Bummer.
Posted by The Curmudgeon at 12:16 PM

Love the picture. Very clever post for someone who must have died about a decade ago. :-D

I work with two computers and two monitors at work, then I come home and watch TV while browsing and blogging on my laptop. Maybe I'm dead and don't know it? Do they have the internet in Heaven?