In my fertile imagination, I write this blog for a national and international audience -- and six or seven regular readers in the States and two or three regular readers overseas does constitute a certain amount of success in this ambition. A very small amount.

But, today, I depart from my usual practice and write about stuff that's strictly local. Although some of this stuff may be in the news where you live, too.

It all started when Mayor-for-Life Richard II fooled everyone by saying he would lay down his office this year.... 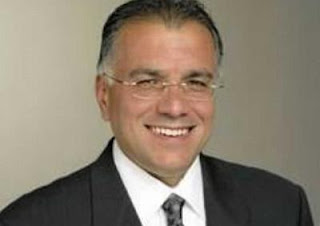 You're looking at a picture of mayoral candidate Gery Chico. Chico was a one-time Chief of Staff for Richard M. Daley and later was president of the Chicago Board of Education. He was a partner at the venerable Chicago firm of Altheimer & Gray... which spiraled into the ground a few years back... and now has his own firm, Chico & Nunes, P.C.

He's been endorsed by the local police and fire unions -- and now he expresses a willingness to end Chicago's residency rule.

Chicago cops and firemen (and all other City employees) are required to live in the City of Chicago as a condition of continued employment. I am not a City employee. Many of my neighbors are. Some -- especially the cops, I've noticed -- express feelings of being 'trapped' in the City and look anxiously toward retirement when they can move away.

But I love the residency rule. I believe it helps support the price of housing in the middle class enclave where I live. Take that rule away... and the only real investment I have left may really tumble in value. You think housing prices have gone down because of the Great Recession? I'm afraid that will be a mere course correction compared to the free fall that may follow if the residency rule is eliminated in Chicago.

Here is another reason why responsible anonymous blogging has a place: This is not a popular opinion. I might be scorned by my City-employed neighbors were these views to be known. Yet it is important that the consequences of the elimination of the residency rule be considered. If housing prices really do fall, moreover, the first cop to move out will be fine -- but his fellow cop neighbors will take a beating if they can't sell as fast. I'd be far more receptive to Local 2 or the FOP negotiating a housing allowance for younger firemen or cops in certain particularly disadvantaged areas of the City. But that's another story.

Is Chico pandering for the votes of cops and firemen? The indispensable Second City Cop blog recognizes Chico's statements as such, but adds, "It's what politicians do."

Chico was running a distant third in the polls before Monday when the Illinois Appellate Court knocked Rahm Emanuel off the ballot. In the surreal world of Chicago politics, however, Chico would probably have become the frontrunner were Emanuel to remain off the ballot.

But Emanuel is back on the ballot, as of this morning, because the Illinois Supreme Court accepted his appeal and ordered a stay of the Appellate Court's decision. Yesterday afternoon the court announced that it was taking the case on the briefs submitted to the Appellate Court and would not hear argument.

The Court's action yesterday signals that a decision is probably imminent, possibly as early as today. Also, to me at least, the Court's action means that whatever the Supreme Court intends to do, there is a clear majority supporting it. Further, it means that the court does not see this as a particularly close case (whichever way it goes) because it sees no need for additional briefing or argument. Finally, it probably means that Justice Anne Burke will be able to recuse herself from the court's determination -- something she probably wants to do inasmuch as her husband, Chicago Ald. Ed Burke, has endorsed Chico. 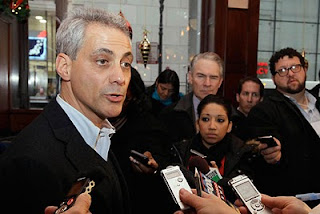 There are some powerful people who've been fighting to keep Emanuel off the ballot.

Burt Odelson, who is leading the legal team against Emanuel, is a well-respected and very successful lawyer in the very narrow (and, in Cook County, critically important) specialty of election law. After he lost at the Board of Elections and in the Circuit Court, some media outlets here were portraying him as a buffoon. He is not.

Nor is Emanuel's success a foregone conclusion. Put it this way: If Curmudgeon, Esq. had been summoned to President Obama's side, not as Chief of Staff of course, but as (for example) deputy assistant to the deputy assistant White House counsel (something junior enough to match my station in the food chain) and were I to return, after having rented out my house, with ambitions to run for Mayor, I would have been rebuffed by the hearing officer. The full Board of Elections would never have gone my way, and neither would the learned Circuit Court judge who ruled in Mr. Emanuel's favor.

Ballot access is as jealously guarded in Chicago as nowhere, perhaps, but in the old Soviet bloc. A right to run is never presumed. Thus, attacking Mr. Emanuel's candidacy was never a foolish quest, however it turns out.

But I can't help but think of an old adage as we watch this Emanuel ballot drama come to a conclusion: He who would strike the king must aim to kill. Emanuel was wounded -- don't doubt it -- by this week's court action, but if the Supreme Court reinstates him he will be anything but dead. In fact, polls show he might win the election in February, without the need for a runoff.

We live in interesting times in Chicago.
Posted by The Curmudgeon at 8:51 AM

I hate to ask the question, is Obama still a "resident?" The only difference seems to be that he isn't renting his house.

i hadn't heard this but wondered what would happen to emanuel.

Dave -- I suspect that, if the Appellate Court decision stands, Emmanuel's renting the house out may be the key fact against him. However, there's been talk that, under this decision, Mr. Obama -- who, you correctly note, has not rented out his Chicago home -- could not return to Chicago and run for mayor because he clearly has been 'residing in' Washington, D.C. With the Supreme Court's decision expected at any moment, the nuances of the Appellate Court decision are probably of academic interest only.