Thoughts of failure on a gray morning

Not a lot of chuckles in this one, probably. 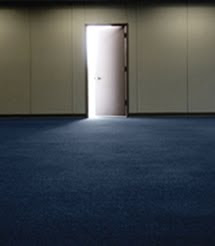 The current ABA Journal came in the other day with a cover story about an overachieving appellate lawyer, a classmate and friend of both Supreme Court Justice Samuel Alito and Hillary Clinton (how's that for variety?) who worked for one silk stocking firm after another in Chicago and Washington, D.C., interspersed with important government service. He argued 16 times before the United States Supreme Court.

However his latest firm decided that he was more of an expensive ornament than a rainmaker; it was decided to lay him off. After receiving the news, this man came to work one final time, checked his email, reset his away messages... and shot himself in the head.

I'm not quite that desperate myself... but I think I can identify with this man's ultimate plight.

Pope John Paul II said that work was made for man, not man for work. Yet, too often, we identify ourselves with our jobs. We are our jobs. Perhaps it is only because I am one also, but I think this is especially true of middle-aged male professionals such as the man in the ABA Journal story: When business is good (when the money is coming in) we are good, too. When business is slow -- or when the cash flow dries up -- the demons get loose.

As a solo practitioner I do and I don't have to worry about rainmaking. I won't get laid off because I'm not an effective salesman -- I'll just starve to death. Was this man in the ABA Journal any less of a skilled lawyer because he wasn't a powerhouse salesman? It has been my observation that some of the most highly regarded rainmakers couldn't be trusted to enter an agreed order in court. And I do not say this with scorn: These are different skill sets, I think. At least when I try and "sell," I have to gear myself up so high that I can't concentrate on work afterward. Particularly on a long project, I have to "gear down" to get focused and capable of doing the work. Have you ever heard professional athletes talk about how the game 'slows down' when they begin to achieve? I imagine that a similar mental attitude adjustment is involved.

Professionally, I see myself as a worker bee. I'd bet that the unfortunate man in the ABA Journal might have had a similar self-image. But the legal profession doesn't particularly value worker bees.

My own demons are out in force this week, with the end of the month upon me and extraordinary bills coming due on the 1st -- bills I have no hope of paying in full. I'll muddle through, of course, because muddling is what I do.

Long Suffering Spouse acknowledged this morning that she may be 'burning out' at school. Some of her teaching colleagues are... searching for a polite word here... difficult. My wife holds kids to standards -- some of her colleagues just pass their charges through, not challenging or disciplining them. And this is at a private school. In the long run, my wife's approach will pay off for her students -- as many tell her when they come back from high school to visit. But, for parents, it can be confusing: Why does my child have no problems with these teachers -- but struggles so with Mrs. Curmudgeon? Does she have something personal against my child? Parents sometimes balk at paying $5,000 a year for the privilege of having someone single out their child for harsh treatment.

This is much on my wife's mind this week -- which began with a special, parent-initiated meeting and will end with regularly scheduled parent-teacher conferences.

But the school pays for our health insurance. And I can't -- not with all the other muddling (our own tuitions to pay, the mortgage, unexpected car repairs...) that I must do. Thus I contribute directly to my wife's unhappiness. I wish it were otherwise.

The funny thing is, though, I'm having a good year this year. *Sigh*
Posted by The Curmudgeon at 8:38 AM

I think most of us identify ourselves with what we do. I think its an American thing. In England they ask 'Where'd you go to school?' as the identifier and here we ask 'What do you do?'.

And tell the Mrs. to keep at it, I know its tough but I paid a lot of $ and had too many teachers let #2 just slide by when he should have been taken to task for a multitude of assignments and actions. We need teachers like her.

Hi, Cur, it's really me, Landgirl. Serendipty must have sent me to your blog when you're feeling blue. I am sorry to hear about your colleague. We just do not know what makes some folks hold on and others slip through the safety net. I know both about letting things go as a teacher--which feels not so good even as you do it; and the really great (but sadly kinda rare)feeling when students tell you that you made a difference. If she gets even one student a semester that she can really connect with, then maybe that can be enough.

And worker bees are the ones that make all the honey one little bit of pollen at a time.

I'm so glad you wrote this. I understand my husband a bit better today.

We (he and I) work so hard all the time and it's because we have to do it - for what.. for to pay the mortgage and unexpected car repairs and tuition for our kids and all the rest that we cannot afford. Work work work and run run run to try and catch up .. always trying to catch up. Worker bees to the hilt. I sometimes (ok, all the time) criticize 'him' for not doing enough. Heck, he's doing all he can. He's probably frustrated too. Well, I know he is.

But, off to work we go. And pay what we can and hug our kids at night and do it all again the next day.

I rambled on a bit, but - thanks for sharing your perspective. Sometimes I get caught up in the 'woe is I the wife' syndrome.

I've gotten much better over the years about being me, not only a lawyer.

Law practice is sometimes fascinating, often interesting and most importantly, it pays the bills.

By chance I met a former partner this morning at a diner. Back when I was with his firm he was the managing partner. We spent twenty minutes or so talking shop and "how's the practice" kind of stuff.

My evolution as a person who happens to be a lawyer gained speed when I left the high cost, fancy firm and became a sole practitioner. Hearing him talk reminded me of what I don't miss at all.

you know curmy the law firm i worked for is real estate only. they are down to almost nothing now. three attorneys, two paralegals, and one lady that answers the phones and does 100 other things. it is so sad. they are working three days a week only too. i sure hope things get better soon. it is a very good time to be retired and for that i am most grateful...

I would have suggested closing shop and work for BigLaw (and finding a job shouldn't problem given your experience). Unfortunately, in this economy most law firms are shedding attorneys and retracting offers. For my friends who are "lucky" enough to keep their current position, they are pressured to work even longer hours to prove their worth. And even with 12 hour workdays there are no guarantees.

I agree with what Shelby wrote. Most of us work to pay the bills. While I am lucky to find a job that I enjoy (for a cause I find worthy), the pressure is still on. By next Spring, I could find myself back on the job market as funding dry up. I try not to think about the bills I have to pay (apartment contract, student loans & accruing interests, etc.) but these things are constantly on my mind.

If I were unemployed, my first and foremost concern is health insurance. Most part-time jobs do not offer health insurance and I know from experience that applying health insurance on my own is a pain in the neck, because health insurance companies have the upper hand. You have to prove yourself to be "worthy" in order to be insured. I am hoping the public option will survive Congress.

I will write a piece about why public option is better than being dependent on employer-based health insurance system (the current insurance). After all, It is my specialty.