Killer algae... and other things that occur to me in my relciner

Not that there's killer algae in my recliner.

No, I watched a program on the Science Channel from the safety of my recliner entitled Killer Algae -- about a very real problem in the Mediterranean Sea. 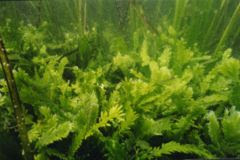 Skip ahead if you don't want me to spoil the ending for you, but it seems that a species of marine algae first developed in a German zoo and used in private home aquariums throughout the world has gotten loose into the Mediterranean where it threatens to overwhelm all indigenous species. The first outbreaks were off the coast of France and Monaco. Fish populations in the affected areas have plummeted because the algae, while not lethal, is so darn toxic that native species would rather die than eat it. (This post on the "Planted Tank Forum" takes a serious look at the program -- if you're interested -- while I'm about to careen wildly away.)

Many of these programs are quite interesting... but paced so ponderously that one can doze off for several minutes at a time and not miss a thing. This is exactly what I was doing the other night while watching... and strange things started happening in my head.

It was probably triggered in part because most of the interviews were in French, with a translation layered over. Of course the fish will starve rather than eat this algae -- they're snobby French fish! I began expecting a younger, long-haired Eric Idle to push his way into the screen and take the program off in (*ahem*) a completely different direction. Maybe to talk about other German laboratory experiments to make other angry algae or military mosses that will conquer the world!.

Then I was starting to remember the Python sketch on mollusks... with door-to-door documentarian John Cleese hoking up his narration on the sex life of gastropods in order to hold the interest of his customers... and what should I notice when I next awoke but the discovery of a natural predator for caulerpa taxifolia, to wit, elysia subornata (per Wikipedia), as "a species of small sea slug, a marine opisthobranch gastropod mollusk in the family Placobranchidae. This sea slug resembles a nudibranch, but it is not closely related to that order of gastropods, instead it is a sacoglossan."

Tell me you're not hearing this in John Cleese's voice now, with a particularly sneering reference to "nudibranch."

Long Suffering Spouse was half-watching the program, too, grading papers all the while. She must have dozed too, though, because the program was being rerun and we were just at the part where the sea urchins exposed to the caulerpa taxifolia in a lab and turned upside down by French scientists wouldn't turn back over for 15, 20, even 30 minutes, willing to starve to death rather than eat inferior non-French algae....

Anyway, Long Suffering Spouse made me turn off the TV and go to bed. Which was almost certainly just as well.
Posted by The Curmudgeon at 10:08 AM

you could call this the first (or last per your spouse) from the series, news from the recliner.

things that make you go hmm.

"but paced so ponderously that one can doze off for several minutes at a time and not miss a thing."

Your thought may be worthy (actually it is, we'll see if I do it) of further thought and a post. What am I talking about? Much of TV and all of talk radio that has to repeat everything way too many times; which I think is an offshoot of your your ponderous complaint.

You really don't have to pay much attention to media these days, they will get around to saying something eventually, enough times, that you'll get the point with no mental effort.

We live in a soundbite world.

Killer algae....they sound like they come from a movie.