All Olympic coverage, all the time

I'm sure there must be other things going on in the world right now but for anyone watching the "news" in Chicago this week it's all-Olympics, all the time.

Maybe you haven't heard (and if you haven't, can I come live where you do?) the International Olympic Committee will announce tomorrow morning whether Chicago, Rio, Tokyo or Madrid will have the opportunity to host the 2016 Olympic Games.

Every TV and radio station in Chicago is announcing that it will carry the IOC's decision live. No one has promised to show any money changing hands. 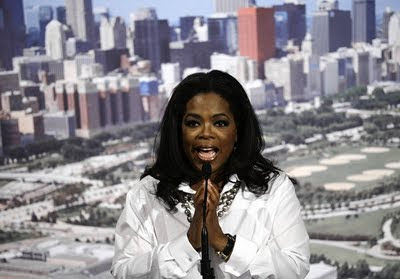 Oprah is in Copenhagen pitching the Chicago bid (that's a link to the Chicago Tribune photo gallery from whence I snagged the image above). Oprah! President Obama will swoop in and make a last-minute appeal as well.

Because of the saturation of local media in town for the announcement, anyone who has a vote with the IOC -- or who says they do -- has been interviewed 10 times. I've seen far too many of these interviews while watching and waiting to see if nuclear war had broken out anywhere. (Aren't there negotiations underway with Iran about their secret plant that we recently revealed? You'd never know it in Chicago.)

Anyway, each of the IOC interviewees, each with a distinctly charming accent, says pretty much the same thing: He or she is waiting until the final presentation to make a decision.

To Chicago ears, this sounds like holding out for the highest bidder.

But I may be cynical.

My consolation: Tomorrow this may all be over.

But it might just be the beginning, too.....
Posted by The Curmudgeon at 8:18 AM

There has been no mention of Olympic bids in the papers here.

ok, but did you hear the one about the prisoner yesterday who escaped from the Manhattan Supreme Court by dressing as a lawyer.

if we're lucky it'll go to tokyo or somewhere else. i remember the years atlanta spent getting ready and the $$$ spent and then, bam (literally) it was gone... remember centennial park?