Wheeee! We play Wii at the Curmudgeon home

Older Daughter and her Husband-to-be visited this weekend; they had to see one of the priests at our parish in order for Older Daughter to receive permission to marry in an Episcopal church. (We belong to the Roman Catholic Church, and it was named for and patterned after the greatest bureaucrats of all time: There is a form for everything, and a cubbyhole into which every form may be placed.)

The interview apparently went well; Older Daughter's name was not read out from the pulpit on Sunday morning.

Because their visit was short, Older Daughter and the Husband-to-be did not bring much with them. They did, however, bring H2B's Wii. 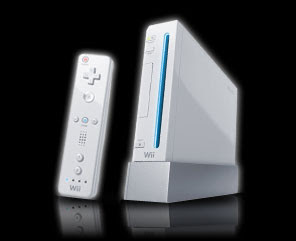 That's what they said, anyway.

I immediately suspected a darker purpose. And, of course, this being my blog, I was entirely correct in my suspicions.

Youngest Son assisted H2B in setting up the infernal device. Older Daughter showed me how to strap the game controller to my wrist so I wouldn't accidentally throw it through the TV or into anything else breakable.

The tumblers clicked into place when Older Daughter asked me to play against her in a game of bowling.

The idea is that the player mimics throwing the bowling ball by an appropriate flick of the controller. A sensor positioned atop the TV for this purpose picks up the movement and guides the onscreen ball accordingly.

Then it was my turn.

It turns out that I can throw gutter balls in my den just as well as I can in a real live bowling alley. I also managed to throw the ball backwards -- something I've never actually done in real life -- causing all the little imaginary people on the screen to leap out of the way. The only consolation was that I didn't have to rent clown shoes.

Long Suffering Spouse, H2B, Older Daughter and Youngest Son laughed until they ached. It is possible, of course that they were laughing with me. (I did, in fact, laugh until tears blurred my vision.) But I'm pretty sure they were laughing at me.

Not wanting her mother to be spared from the humiliation, Older Daughter set Long Suffering Spouse and me up with a driving contest. There is a different controller for this purpose. It resembles a steering wheel in that it is round... but, unlike a steering wheel, only the slightest movement was necessary to send the little on-screen car careening wildly out of control. Several times, apparently, I was proceeding against traffic -- going backwards. I didn't realize this until the kids pointed it out; I was just happy to be on the road. Or the ice floe. Or the mushroom tops. (The driving surfaces varied.) I kept colliding with things, whether driving against or even with traffic, some of these things damaging the car, some of these conferring temporary super powers. I think I beat Long Suffering Spouse in two of three races... meaning I finished 11th and she 12th against a field of ten other imaginary opponents. I think once I actually finished the course before the race was called.

Then they tried to make me play tennis. At this point we must draw the veil of charity over the proceedings.

Finally, Long Suffering Spouse and I were able to excuse ourselves and go to bed. Older Daughter, H2B and Youngest Son remained... driving and bowling and tennising.

Long Suffering Spouse heard Youngest Son come upstairs around 5:00am. "I knew I only had a limited time with the machine," Youngest Son explained later. "I wanted to make the most of it."

Wheeee.
Posted by The Curmudgeon at 7:32 AM

I think the Wii game unit was designed solely to make first time users look like idiots! My one and only experience with the Wii box went pretty much the same!

The Wii is a work of technological genius, and at least you haven't been bowled off the lane by a 7 year old as I have.

Sounds like you played Mario Kart as well, which is the boys favourite thing in the world ever, and they talk about little else.... I can see them writing glowing blog posts about in 20 years time.....

Oh I so want to get it for myself