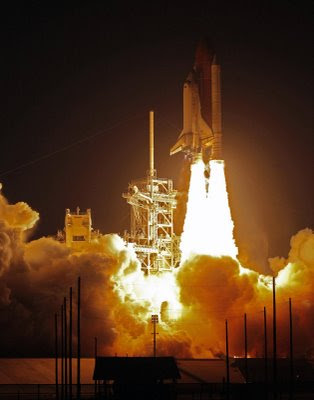 Shuttle Discovery took off from Florida last night, climbing into low Earth orbit for a rendezvous with the International Space Station.

This time, America's Space Truck is under the command of Air Force Col. Lee Archambault, pictured at left, a native of the near-west Chicago suburb of Bellwood and a graduate of Proviso West High School. The mission has two major goals, first, to deliver Koichi Wakata of the Japan Aerospace Exploration Agency to the space station and, second, to deliver and install the "S6 truss" to the station. According to NASA, "The S6 truss will complete the backbone of the station and provide one-fourth of the total power needed to support a crew of six." The truss will support energy-generating solar panels. The STS-119 Mission Summary (which you can access by following the NASA link in the preceding sentence) also advises that the shuttle crew will also "replace a failed unit for a system that converts urine to potable water."

This last task in particular may not seem glamorous, but this 'ultimate recycling' is of vital import if human exploration of space is ever going to really begin.

At this point, for all of our Shuttle launches, we are still playing in Mother Earth's back yard. Once we went to the Moon -- Col. Archambault grew up, he said, carefully following the career of another Bellwood native, Eugene Cernan, one of only a dozen men ever -- so far -- to have walked on the Lunar surface. But that is like a toddler walking to the corner -- and coming straight back. As a species, we've yet to cross a 'busy street.'

And Mother Earth's back yard is getting crowded, too. The space station recently had to be moved to avoid a piece of floating space debris. The Chicago Tribune reports this morning that the station may have to move again in order to avoid a chunk of a disintegrated Russian satellite.

If Col. Archambault's mission seems a little prosaic, the fault does not lie with him or his brave crew. The fault lies with our short-sighted leaders who hold back men and women with the vision and drive to reach for the planets and, some day, for the stars. 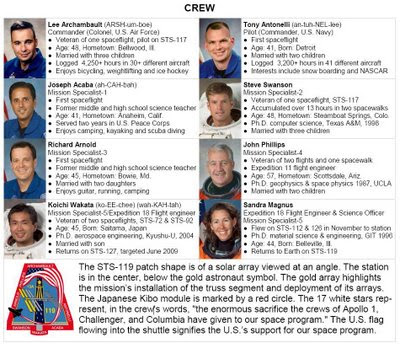 Posted by The Curmudgeon at 7:47 AM

very interesting! sarge said if you want to lift some of his photos he doesn't care. he told me to tell you.

With your outer orientation, I've wondered if you read Heinlein, Asimov, Bradbury, etc. and if so, what you thought. You're of an age after all.

Thanks, Bee and Sarge, for the offer to copy your launch photos. Yours weren't the only ones I saw today, clicking around.

You know, we read Clarke in high school English. Kids today don't; at least, none of mine did.... They should, though.

I suppose that answers your question... and creeps you out a little....