In today's Heads or Tails challenge, our very own Duchess of the Dictionary, Barb, has asked us to consider the word "royal."

There are a lot of ways to go with this -- I could go political: I wrote this morning, for example, about Chicago's very own Fr. Michael Pfleger who's long been a royal pain in the tuchis for the Archdiocesan hierarchy.... Or I could talk about baseball. The Kansas City Royals are in town tonight, weather permitting, to face my Chicago White Sox... and if anything can awake the Sox' slumbering lumber it may be KC pitching. Or I could talk about the English royals -- always good for a story: Michael Sneed reports in her column in this morning's Sun-Times that QE II (the monarch, not the cruise ship, Bee) is not amused that Kate Middleton, the on-again, off-again girlfriend of the future King still has no full-time job, though she graduated from college four years ago. I guess the economy's tough everywhere, eh?

But after thinking it all through, and I decided to talk about... Nepal. 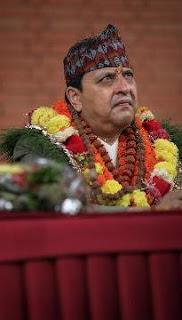 The fellow at left has lost his job and is being booted out of his home.

He is, or was, Nepal's King Gyanendra. An article today by Paul Tighe on Bloomberg.com describes how the ex-king has acquiesced to the Constituent Assembly's decision to declare his country a republic and require him to leave his palace by June 12 "to ensure the peaceful development of the Himalayan country." He may ask for additional time to pack, however.

What Shakespeare said in Henry IV Part II is even more true today: "Uneasy lies the head that wears the crown."

One can not help but wonder if, the next time Bob Seger wants to go to Kathmandu, he may require a Chinese passport?
Posted by The Curmudgeon at 10:52 AM

There just don't seem to be many jobs for future Queens these days. I know. I looked. :P

This past weekend I thought about a post you did.

It was the weekend for me to set up "The Arrangement Of The Fans. I remembered your post from last year about LSS doing that.

I had little knowledge of this former monarchy.

You really gave me more information on a situation I had only vague knowledge of - thanks.
Mine is up @ The Cafe.

Where does a former king go to job hunt? I bet his country doesn't give him as much of a retirement package as we give our congressman. He looks wicked, but probably has his loyal followers, as all royals do.

Since the KING is leaving peacefully as the proper acquiesce of the voters, why do we not have term limits in the USA?

See what we have here of those elected officials who stay far past their prime, at least IMO, at least in the Senate:
- Strom Thurmond left at 99
- Robert Byrd is 90
- Frank Lautenberg is running again at 84.

None of the previous esteemed ever considered leaving office. Gotta love it...

Curmy, I wrote the last one. You'd think after all this time, I'd check who owned the profile currently on the screen...but not me!

I wish a lot of the occupants in the Capital would take the high road and leave, like the Nepalese king.

The Bard was right.

ROYALTY – SPOILTY, at The Mane Point

I have a funny (to me) judge story. I think the more judge stories I gather, the less funny they'll become.

I agree with my spouse that term limits would be helpful. Some of these guys should just hang up their hats!

Maybe the ex-king can get unemployment benefits for a while until he gets his life in order.