Curmudgeon presumes to suggest how to read the news

Writer, director, and current Dodger radio pre-game host Ken Levine has discerned some immutable laws of nature which he has collected as Levine's Laws, one of which is:

In every article that mentions you, no matter how complimentary the article, there will always be one thing said or misquoted that will prevent you from Xeroxing and sending it to your family.

Have you ever been the subject of a news story? Have you ever seen a spectacular accident on the highway or a fire down the street and waited anxiously to see how the story would be reported on the evening news?

If you have answered yes to any of these, you've probably snapped off the TV or put down the paper in disgust wondering how anyone could have gotten the story so wrong.

My own perception is that the closer you are to a news story, and the more you know about the subject, the less accurate you are likely to find the reporting.

Now there's only one actual reporter that I know of who stops by this blog regularly and comments (and I'm surely not picking on you, Patti). I cast aspersions on no one at all. It simply occurs to me that -- though we're saturated with news -- not a lot of people read the news critically. And we should.

My own rule is to try and read multiple stories about anything in which I'm interested. That gives me the best chance to get past the reporters' biases and preconceptions and to the truth at the core of the story.

Now, of course, news writing is supposed to be bias-free -- opinions are for columns, the editorials and the op-ed page. But I had a journalism teacher in undergrad -- since passed away -- who said that was a bunch of hooey. Not only was it not in the best historical tradition of newspapering (you need only read a little history to know the truth of this) but it was also impossible.

The best one could hope for, he said, was to be fair. To know you lean in a particular way... and make sure you consider the other side in writing your story up.

Even if the news is reported 'straight' -- no bias being detected on even a critical reading of the piece -- how the story plays may reveal volumes about the editors' or owners' biases. Also, noting how the same story is handled by different outlets can give the critical reader a sense of the story's true import. Because not everything that runs on the front page of the XYZ Gazette will even be picked up at all in the XYZ Times. 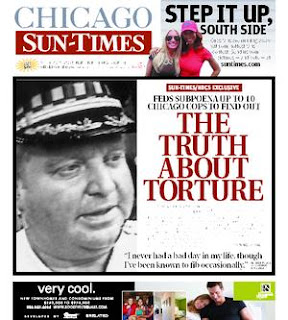 Here is a real life case in point. Yesterday the Chicago Chicago Sun-Times carried on its front page a story about the latest Federal investigation into allegations of torture by certain members of the Chicago Police Department working for Commander Jon Burge. That's the man pictured in the reproduction of the paper's front page, above. These allegations of torture go way back -- all the way to the 1970s. Even the most recent allegations of misconduct under Burge go back to the late 80s or early 90s. Some of the alleged victims of torture were convicted of capital crimes, and the alleged misconduct figured in the pardons and commutations of Death Row inmates issued some years back by then-Gov. George Ryan. The City of Chicago has paid out $20 million to settle some of the civil suits arising from some of these allegations. A special report paid for the by Cook County State's Attorney's Office, issued in 2006, concluded that no criminal charges could be brought against Burge or his subordinates because the statute of limitations had expired.

Anyway, the Feds are apparently looking into whether they agree or disagree with that conclusion. In the Sun-Times, it was page one news.

In the Chicago Tribune, though, the story played on page 11 of Section 2, next to the obituaries.

Just a slight difference in emphasis. And for a completely different perspective, there's this take from the always informative police blog, Second City Cop. (Fair warning: the comments on that blog are often profane, and are particularly so on a topic like this one.)

When you read only one newspaper or watch the news on only one station, you're not getting the whole story. If you're concerned about a particular issue you need to broaden your horizons, and check out different sources. Try and read between the lines.

Of course, that leaves less time for reading blogs like this one. So maybe I shouldn't have said anything....
Posted by The Curmudgeon at 8:49 AM

OMG! You hit the nail on the head on one of my pet peeves. I struggle watching TV news becuase I insist its NOT news. Its a bunch of opinion. I have been trying to impart this wisdom on my children with special emphasis on the fact that just because its in print doesn't make it true. Maybe I will use your linked examples to drive the point home to them!