And now a kind word about Fr. Pfleger (seriously) 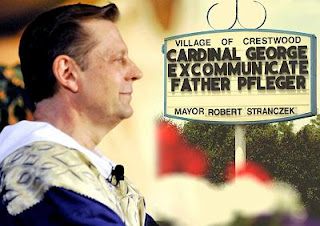 This composite photograph, taken from the website of the
Chicago Sun-Times this morning, shows Fr. Michael Pfleger at left,
and, at right, some unsolicited advice for Chicago Archbishop
Francis Cardinal George from the Mayor of south suburban Crestwood.

Karen Hall, of the blog Some Have Hats, who doesn't know all the history, wants Fr. Pfleger's head. Chicagoan Tom Roeser, who does know the history, also wants Fr. Pfleger's head. Probably on a pike on East Superior Street -- although, he predicts in this post, "Catholics will wait a long time if they expect that the timid, mild, semantically parsing archdiocese will punish Fr. Michael Pfleger on its own." (Roeser pins his hopes for Pfleger's comeuppance on the Democratic Party. Party elders must be very unhappy with Pfleger, whose anti-Hillary rant from Jeremiah Wright's old pulpit has helped keep Trinity United Church of Christ in the news.)

I'm pretty sure that Fr. Pfleger and I would disagree on many things. In fact, we probably wouldn't get along at all. But I have a kind of cockeyed respect and admiration for the man. So allow me to lag behind in the rush to judgment.

A great many charismatic pastors forget who they're preaching about somewhere along the way. They become near cult figures themselves.

And they build empires. For themselves.

For all his faults, for all his wretched excesses, Fr. Pfleger has stayed within the Catholic fold.

Not by much -- if you read Mr. Roeser -- but if the lambs that follow Pfleger are all over in the farthest corner of the sheepfold, they are still in the flock. You can click on the Archdiocese of Chicago website this morning (where you will find a statement of regret from the Cardinal concerning Fr. Pfleger's remarks) and you can find a link to this St. Sabina website. It's not the current link -- this is (you can read Fr. Pfleger's apology here) -- but the point is (though he may have threatened to leave from time to time -- see Mr. Roeser) Pfleger has so far stayed faithful to his vows and faithful to his Church.

It surely must be tempting, and it surely would be more rewarding for Pfleger (in the short term, at least) to start his own church, build his own empire, and rake in all the cash for himself.

The Michael Pfleger portrayed in this morning's Sun-Times interview, by Cathleen Falsani, is a very contrite-sounding individual and one who seems well aware of -- and willing to accept -- the superior authority of his bishop, Cardinal George.

Of course, my blood pressure spiraled when I got to the end of the piece, where Falsani quotes Pfleger as saying, "This is a dangerous time in America, the freest country in the world... where you have to whisper your thoughts."

No! You don't have to "whisper your thoughts" because these are dangerous times in America. Any responsible person always has to watch what he or she says because what is said, and where it is said, and how it is said, may have consequences. It's hard to disagree with Fr. Pfleger when he says that Senator Clinton conveyed a sense that she was 'entitled' somehow to the nomination -- her early campaign strategy was to make her appear to be the inevitable nominee. But whatever larger point Pfleger may have thought he was making (or later claimed he was trying to make) about race relations in mocking Senator Clinton was lost entirely because of who he has been -- a friend and active supporter of Senator Obama -- and where he was speaking, and in his clearly partisan tone.

Email ThisBlogThis!Share to TwitterShare to FacebookShare to Pinterest
Labels: Catholicism, Roadkill -- politics in the middle of the road

there is a theory going around now that this was a set up to hurt obama. that this church for some reason is out to get him. don't know, just what i heard.

I wholeheartedly agree with you.

I agree that from the start Hillary acted like she was going to be anointed, that it was due her. Not sure why she felt that way, but...
she certainly conveyed that message, didn't she?

I don't understand or trust Pfleger.