To be more precise, a 4½ foot American alligator was found Friday, alive and feisty, in the Chicago River. 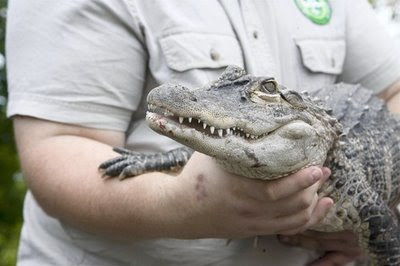 To be specific, Mary Owen's story in today's Chicago Tribune says the gator was found in Bubbly Creek, a branch of the Chicago River that runs on the South Side near the site of the old Stockyards -- at one time nothing more than an open sewer. The "bubbles" that gave the stream its name came from rotting animal entrails. (Says the linked Wikipedia entry for Bubbly Creek, by "the 1990s the only living metazoans in the creek were huge numbers of bloodworms feeding on the estimated two meters of rotting blood in the bed of the hypoxic creek." Yum.)

And, now, writes Owen, Bubbly Creek "has a bountiful fish population, which the alligator likely fed on." The alligator's "diet includes rats, birds and fish."

You know, they used to laugh at the first Mayor Daley when he said someday people would fish in the Chicago River at lunchtime and catch fish to eat. So the restoration of this worst possible branch of the stream to a place where even exotic wildlife can flourish... that's a good thing, I think.

But alligators? I'd prefer not to catch such a beast at lunchtime or any other, thank you.
Posted by The Curmudgeon at 11:45 AM

somebody bought him in florida and flushed him??? poor guy, what a life. now that being said, ewwwww...

One of my uncles found one like that years ago on our family farm in northern Mississippi. Keep in mind, this is in NORTH Mississippi, not exactly the Bayou or even Delta - - more like an extension of southern middle Tennessee. My grandmother put the thing in the back of her pickup truck and drove it straight to the Tupelo zoo.

I would like to know how he got there. On same link was an article about a friend of Mayor Daley buying property on Bubbly Creek. Is the deal off now that the 'gator is gone?

Sharon, the gator didn't enhance the value of the property. A semi-privately funded massive environmental clean-up of the property (by a utility company) is what turned it into desirable real estate. That and massive clean-up efforts in the river, also publicly funded. Somehow, however, desirable property like this always manages to find its way back into the hands of a friend of the mayor's, many of whom eventually wind up in jail. It might not stink so bad if the buyer were the one who did the clean-up... but, of course, that's never what happens, is it?