Tough morning to be a White Sox fan 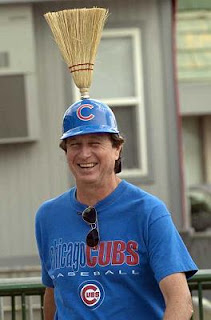 But I'm still here -- a little red-eyed and puffy -- after the debacle this weekend at Wrigley.

At least I didn't see this guy live and in person. Seeing him today in the newspaper was bad enough. (Photo obtained from the Chicago Sun-Times.)

After Mass yesterday, when there was still hope of getting out of Dodge with at least one win, I and the rest of the family were accosted by our pastor, Fr. Ed (no, not his real name), a life-long, true-blue Cub fan. We took it with as much grace as we could muster. Most of the time, we actually like Fr. Ed... but yesterday? Not so much.

Still, we live in Cub Country, on Chicago's Far Northwest Side. And, at the moment, they are firmly in control of the City's bragging rights.

But next weekend is coming.... We can still get out of this with a tie for the season series.

And -- although I haven't verified this independently -- Middle Son assures me the White Sox split with the Chubs, er, Flubs, er, that Chicago North Side baseball club in 2005, too.

It worked out OK for Sox fans in the end that year....
Posted by The Curmudgeon at 9:38 AM

now curmy i would like you to know that i read this WHOLE post even though it was ONLY about sports. i just thought i should tell you. you might me interested. or something. just sayin'...

Sorry my friend. There was plenty of pop in the Sox bats - too bad the pitchers all decided to have the worst weekend of the year. Maybe Ozzie needs to go on another tirade?

Do they all have brushes on their hats?

Chris says that payback will be exacted this weekend at the Cell....

As an Indians fan, I suggest we have a moratorium on discussing baseball. But I did suggest in a post late last week that the Indians re rename their park to Regressive Field.