Vatican says no to women priests. Again. Why exactly is this news? 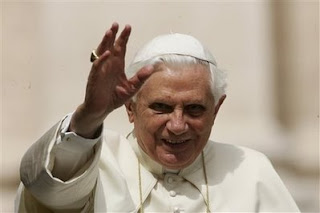 In this May 28 AP photo we can imagine Pope Benedict XVI waving bye-bye as he excommunicates Catholic women who presume to accept ordination as priests.

An AP story Friday reports that the Vatican has issued a decree that provides that anyone participating in a ceremony in which women are ordained are automatically excommunicated.

Now -- you can hold any position you like on the subject of whether women should be able to serve as priests in the Roman Catholic Church. I personally don't see why women can't be priests; I understand the rationale for priestly celibacy much more than I understand any explanation for the exclusion of women. I suspect, though I know of no proof, that women did function as priests in the earliest Church, before Constantine, if only because the faith spread far more readily and rapidly among women than men.

Although I don't know what one would call a female priest. "Father" seems... confused. Perhaps an Anglican reader can advise?

But that's not the point. The point is that, as Catholics, we accept that the Pope and the Bishops get to make the rules. We don't necessarily like all of the rules, and we don't always follow the rules (neither do the Bishops, sometimes with tragic results), but we accept, in principle, their rule-making authority. And one of the things that the Bishops get particularly uptight about is letting girls into their club. So why is it news that the Vatican would consider as excommunicated any women who presume to accept ordination as priests and those who would presume to ordain them?

Apparently, in Canada this week, a group called the Roman Catholic Womenpriests Movement purported to ordain as priests one woman and one married man.

There you go. One story from Vancouver involving two people and a fringe movement -- and about a jillion stories on the Internet about the Vatican cracking down. (I ran a search before making this statement, by the way.)

If I were paranoid I'd think that the anti-Catholics of the world were just taking this latest opportunity to bash the primitive, oppressive Catholic Church.

Look: Whether we Catholics accept women as priests is our problem, not anyone else's. While many Catholics may consider the ban silly, others do not. We all know that the Church is not the Pope or the Bishops. The Church will persist when all the current crop of bishops have gone to their reward (or punishment) -- and the Church will change, or not, in time, as inspired by the Holy Spirit.
Posted by The Curmudgeon at 7:42 AM

Email ThisBlogThis!Share to TwitterShare to FacebookShare to Pinterest
Labels: Catholicism, News and Views

You are absolutely right...The Catholic Church has the right to self determination. People who don't play by their rules don't get to play. I am not Catholic, but I am eternally grateful to them for saving the Word of God through the centuries. The Church is not one denomination or another, but The Bride of Christ...He is coming again to claim His Bride! Meanwhile, I think Catholics need to follow the rules as decided by their leaders or start their own club.

Reverend is what we call our female minister, Curm. (We go to a Congregational Church)

And why would bishops go to their punishment instead of their reward? Sounds quite harsh for men of the cloth.