In this morning's post, I suggested a retired Marine Corps general as a helpful running mate for Senator Obama. Senator McCain doesn't need any help establishing his military credentials. His service record is more than sufficient. From Wikipedia (footnotes omitted):

John McCain's capture and imprisonment began on October 26, 1967. He was flying his twenty-third bombing mission over North Vietnam, when his A-4E Skyhawk was shot down by a missile over Hanoi. McCain fractured both arms and a leg, and then nearly drowned when he parachuted into Truc Bach Lake in Hanoi. After he regained consciousness, a mob attacked him, crushed his shoulder with a rifle butt, and bayoneted him; he was then transported to Hanoi's main Hoa Loa Prison, nicknamed the "Hanoi Hilton". 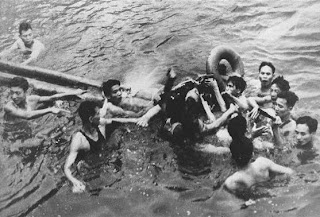 Although McCain was badly wounded, his captors refused to treat his injuries, instead beating and interrogating him to get information. Only when the North Vietnamese discovered that his father was a top admiral did they give him medical care and announce his capture. His status as a prisoner of war (POW) made the front pages of New York Times and Washington Post.

McCain spent six weeks in the Hoa Loa hospital, receiving marginal care. Now having lost 50 pounds (23 kg), in a chest cast, and with his hair turned white, McCain was sent to a different camp on the outskirts of Hanoi in December 1967, into a cell with two other Americans who did not expect him to live a week. In March 1968, McCain was put into solitary confinement, where he would remain for two years.

In July 1968, McCain's father was named commander of all U.S. forces in the Vietnam theater. McCain was immediately offered early release. The North Vietnamese wanted a worldwide propaganda coup by appearing merciful, and also wanted to show other POWs that elites like McCain were willing to be treated preferentially. McCain turned down the offer of repatriation; he would only accept the offer if every man taken in before him was released as well.

In August of 1968, a program of severe torture began on McCain, at the same time as he was suffering from dysentery, and McCain made an anti-American propaganda "confession". He has always felt that his statement was dishonorable, but as he would later write, "I had learned what we all learned over there: Every man has his breaking point. I had reached mine." His injuries left him permanently incapable of raising his arms above his head. He subsequently received two to three beatings per week because of his continued refusal to sign additional statements. Other American POWs were similarly tortured and maltreated in order to extract "confessions" and propaganda statements, with many enduring even worse treatment than McCain.

McCain refused to meet with various anti-war groups seeking peace in Hanoi, not wanting to give either them or the North Vietnamese a propaganda victory. From late 1969 on, treatment of McCain and some of the other POWs became more tolerable. McCain and other prisoners cheered the B-52-led U.S. "Christmas Bombing" campaign of December 1972 as a forceful measure to push North Vietnam to terms.

Altogether, McCain was held as a prisoner of war in North Vietnam for five and a half years. He was finally released from captivity on March 14, 1973.

I don't usually clip such long sections, but it seemed appropriate here. Even in an encyclopedia entry, it's a compelling narrative.

If elected, McCain would not be a "military hero" in the Grant or Eisenhower mold -- he planned and executed no grand strategies, he won no battles. But even the most partisan Democrats won't question his heroism.

The problem for Senator McCain is that he comes off as the grumpy old man who is forever shooing kids off his lawn. For balance, he'd need someone younger, hipper, "cooler" -- obviously flexible, someone whose presence on the ticket would highlight McCain's argument that he's not as doctrinaire as he will be portrayed by his opponents.

In short, McCain's ideal running mate would be... Barack Obama. Or at least a more conservative facsimile thereof.

Unfortunately, Mr. Obama will probably be otherwise engaged in November... although Hillary still has her own hopes.....

If McCain accepts Huckabee it is because he has subscribed to the rule of "keep your friends close and your enemies closer."

American presidential primaries are about appealing to party activists -- thus Democrats must run Left and Republicans must run Right. The survivors of this process have to then reverse field and run back toward the Center... where most Americans really are.

That will be hard for both candidates this year. Arguably, Senator Obama started left and has stayed there -- if Senator McCain can be said to have started closer to the center... it must also be said that he ran hard right, picking up baggage like the endorsement of the Rev. John Hagee along the way. (Wikipedia says the Rev. Hagee has apologized for some of his more virulent anti-Catholic remarks. But is this apology grounded in expedience or repentance?)

Sadly, though both candidates seem to be honorable and worthwhile as individuals, deciding for whom to vote may come down to deciding whose allies, confederates and hangers-on are less scary.

And that does bring us back to McCain's selection of a Vice President. Although the Republicans have held national office for nearly eight years now, the crop of likely veeps is very thin. Anyone too closely associated with the present administration is radioactive. And Republicans have a hard time playing young and hip and cool. I believe the last time they tried this for purposes of a national ticket, this is what they got: 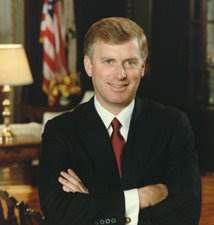 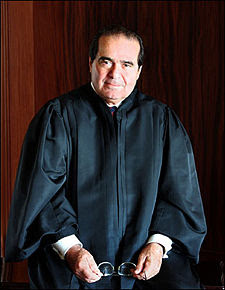 Maybe the best advice would be to counter former University of Chicago Law Professor Barack Obama with a former University of Chicago Law Professor of their own. (Yes, yes, I know, Obama was never full-time on a tenure track -- but, although academics may think it's a crime, most people think that "Professor" is an appropriate title for any instructor at an institution of higher learning.)

But Justice Scalia is already 72 -- and, besides, why would he want to give up his present gig?

McCain's ultimate selection may be the biggest surprise of the year -- and, given the long odds facing Republicans this year, an honor many would want to avoid. Who would you recommend for Senator McCain?
Posted by The Curmudgeon at 1:30 PM

condi rice. that's my choice, she is brilliant, likable, black, a woman, conservative, she is a total package and i LOVE her!

I think like Miss Bee, but I do not think she wants the job, she would be the perfect choice that trumps the only thing the dems have going for them, a black or a woman, man, Condi would be a great choice.

Condi would be a terrible choice, seen as pandering to counter Obama. Romney may get the nod.

That said, I don't quite understand why McCain gets an automatic national defense A+. His war experience which you chronicle, has no relevance to an ability to lead the country in foreign relations. Yes he fought for the country. Yes he's a patriot. Neither means he will make a good president.

I'm not saying that Obama is the man, I'm still trying to figure that out; but, it seems to me that Obama need not concede the matter to McCain based on age and military service.

Sorry to be serious.

I would wager that Romney is the choice.

How about Steven Colbert.

He's young, speaks well and has a great sense of humor.

Dyed in the wool Republican here and sick unto death of this campaign that has been in the works ever since 2004. They started way too soon and have shown us nothing so far. If McCain would forego his stance on "global warming" and get prepared to deflect any racist stuff, perhaps I could get excited about him. He is offering to stop pork barrel spending, isn't he? I really dislike his being a member of the gang of fourteen and his association with Teddy Kennedy. Washington is getting to be one big pot ... stir it and it stinks!