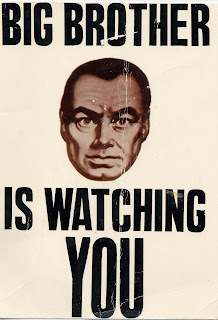 From the Times of London today comes news that the British government is planning a "database holding details of every phone call, e-mail and time spent on the internet by the public as" -- you know it's coming... but... wait for it -- "part of the fight against crime and terrorism."

In America, Orwell's nightmare vision came to life as the Total Information Awareness Program of the Information Awareness Office. Although the linked Wikipedia article says that the IAO was closed and that the TIA program was "defunded" by Congress in 2003, "several of the projects run under IAO have continued under different funding."

But maybe most of you remember Benjamin Franklin. He once said, "They who can give up essential liberty to obtain a little temporary safety deserve neither liberty nor safety."

A man who can quote Benjamin Franklin ... sigh ... let me know if Long Suffering Spouse ever throws you out so that I can catch you!

And you're right - this is pretty scary stuff (much scarier than the CBS reality show of the same name!).

I agree this is scary. I don't want BB knowing my every move.

Not that I ever do anything wrong.

Sometimes I wonder if anyone in a leadership role has any idea about any of this. I think the book was off by a couple years. 2004 is closer to our experience. But the story hits home. Thanks.

funny that would not change my life one bit as i put every thought in my head on my blog anyway! or so i have been accused! ha ha ha

Yes, he was right. Big Brother is watching. Scary stuff.