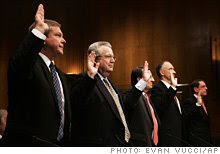 For the Oil Moguls, that is.

Oh, sure, the U.S. Senate Judiciary Committee wagged their fingers and wrung their hands at a group of oil company execs yesterday. Now the Senate is on record as being "concerned."

When the price of gas gets to $6 a gallon, they'll probably get really concerned -- concerned enough, perhaps, to ask some obvious follow up questions of their witnesses.

If Steve Hargreaves' account, for CNNMoney.com, is at all accurate, the Senators failed utterly to even the most obvious questions to some incredible statements.

Hargreaves quotes Illinois' senior Senator, Dick Durbin, as asking, "Does it trouble any one of you - the costs you're imposing on families, on small businesses, on truckers?"

Why, yes, Hargreaves writes, the oil moguls "said it did, and that they are doing all they can to bring new oil supplies to market, but that the fundamental reasons for the surge in oil prices are largely out of their control."

Imagine someone running a store. He sells something that everyone wants and he charges so much per item that he racks up, oh, say $36 billion in profits in the first three months of 2008 -- like the companies represented by the Fab Five before the Judiciary Committee yesterday, Exxon Mobil, ConocoPhillips Co., Shell Oil Co., Chevron and BP. Now one way that our hypothetical shopkeeper can keep profits from being so huge is to cut the price for the items he sells.

Why didn't the Senators ask the execs if they might cut the prices they charge? You know, voluntarily? Apparently, though, something that obvious was beyond their grasp.

And the oil company execs were puffing smoke and flashing mirrors. From Hargreaves' article:

"We cannot change the world market," said Robert Malone, chairman and president of BP America Inc. "Today's high prices are linked to the failure both here and abroad to increase supplies, renewables and conservation."

Malone's remarks were echoed by John Hofmeister, president of Shell.

"The fundamental laws of supply and demand are at work," said Hofmeister. The market is squeezed by exporting nations managing demand for their own interest and other nations subsidizing prices to encourage economic growth, he said.

Shell's Hofmeister insisted there's no free market for oil... but not because of Saudi sheiks or other tyrants around the world. No! Once again, it's really America's fault. Hargreaves writes that, according to Hofmeister, "the problem is that access to resources in the United States has been limited for the past 30 years."

You want lower gas prices? the execs asked. Well, they said, let us plunder those "large parts of the U.S. that are currently closed to drilling - like sections of Alaska, the Rocky Mountains and the continental shelf." Hargreaves continues:

Granted, one engine that can drive price increases is scarcity: If there isn't enough of something, the price will go up. That's true for Wii game consoles, certain hybrid automobiles, and other products.

Someday, certainly, it will be true of oil as well, especially as China and India ramp up their economies.

But there's no scarcity today.

Chevron's Peter Robertson, vice chairman of Chevron, gave that one away, according to Hargreaves' article: "We are investing all we can [in finding new oil] given the limitations of access and our own human capacity," Robertson said. "We have adequate refined capacity, inventories are at an all time high. The issue is the price of crude."

Crude oil prices burst through the $100 per barrel price level this year -- but some of these 'prices' are futures contracts -- guesses, really, of where prices will be in the future -- bets, in effect, of where the actual price may go. Futures contracts don't necessarily mean anything in the case of our hypothetical shopkeeper who's priced his goods so high that he's making obscene profits. The bets that investors make don't prevent our shopkeeper from marking down the prices on his shelves.

And they don't prevent the oil companies from marking down their prices either.

The one thing on which the oil company execs were absolutely united was that windfall profits taxes are bad. What did you expect them to say? Hargreaves writes, "In the short run, experts say there's little politicians can do to bring down the price of gas." The experts may well be right.

But the oil companies can bring down the prices that they set. They can do it right now. And if they fail to do so, the current crop of politicians will be thrown out of office by their constituents... and their successors will start thinking not just in terms of windfall profits taxes... but nationalization.

Unthinkable? So was $4 a gallon gas, and just recently, too.

In the meantime, the Senate Judiciary Committee will continue mugging and preening for the cameras, uh, hearings today. And nothing substantive will be accomplished. Why?

Because when oil companies start talking about things like "conservation," a lot of our allegedly populist senators go weak in the knees. They're in favor of conservation. They're against global warming. And if we selfish, greedy Americans would just change our behavior, we'll all achieve an earthly paradise. And if it takes gas at $4... or $5... or even $10 a gallon to bring this transformation about... well, that's all for the good, isn't it?

You know, the end justifies the means?

Well, I'm in favor of conservation, too -- and even if I don't accept the Gospel of St. Albert of Gore, I know the day must come when oil will be scarce. And we have to start seriously looking for alternatives. (Giving subsidies to corn farmers and driving up the world price of a food staple isn't serious. Except if your poor and living in Mexico and can't afford tortillas any more.)

And if the oil companies were truly serious about alternative energy sources, they wouldn't have these profits either -- they'd plow back these enormous profits into research and development. They'd have small profits on their enormous revenues.

But -- for all their talk -- they're not doing this. Otherwise they wouldn't have these huge profits... doesn't anybody get this?
Posted by The Curmudgeon at 8:31 AM

Eric Zorn of the Chicago Tribune must be reading your Blog!

Read his column in today Trib.

You gotta love those ethanol subsidies: US ethanol makers getting a $0.51 tax credit while having an excise tax of $0.54 on imported ethanol. If it is such a great business, why are subsidies need for US producers? And if ethanol from Brazil is so much cheaper, why not buy all they want to sell minus the tax?

I'm not placing the blame so much on oil execs but the traders. I hate conspiracies, but ther has to be some program um...finesse that accounts for much of this. Didn't Goldman Sachs predict $200 oil. It doesn't take much prompting to assume the traders/bankers/financiers have their hands in manipulating prices? Can't prove it, but still...

WE get it. Hopefully soon they will, too.

The four large U.S. oil companies (ExxonMobil, ConocoPhillips, ChveronTexaco, and BP) averaged about 8.1% profit margin in the most recent quarter or year.

Then the breakdown is

So which is the bloodsucker?

BTW those numbers don't include the mark-up for the gas station operator.

The oil companies could forego all profits. That would bring gas down to... $3.75! Yippee!

It would also crash their stock prices. So what? Thousands of mutual funds and pension funds hold oil company stock. So much for all those investors and retirees, eh?

Meanwhile, Saudi Arabia alone takes in $78 billion per quarter in oil revenue - three times as much as the Big Four combined.

Oh, uh, Ralph? There is a secret conspiracy to force up oil prices. I can't tell you the name (it's a secret), but it begins with "O", and ends with "C", and the middle is the class where kids play volleyball.