Unsolicited advice to the (presumptive) nominee

Oliphant cartoon obtained from Yahoo! Comics.
At some point, maybe even before the convention in Denver, Mrs. Clinton is expected to step aside gracefully and acquiesce in the outcome of the nominating procedures of her party. I'm not entirely certain that this will happen -- if someone told me her middle name was "Rambo" I might be willing to believe it -- but this is the conventional (*ahem*) wisdom at this point.

If she does step aside, a faction of the Democratic Party will boost her candidacy for Vice President. In the accompanying cartoon, Mr. Oliphant seems less than enthused about this prospect.

Senator Obama should also feel less than enthused. If he does select her it would be only because he believes the old saying, "Keep your friends close and your enemies closer." She would not be a loyal helpmate; in her mind, at least, she's been there, done that.

Besides, the Republicans would have a field day, using clips of Clinton's attacks on Obama and Obama's attacks on Clinton in their advertising. Even in what should be a big Democratic year... it just might work.

No, what Senator Obama needs is someone for balance. He's perceived as inspirational, even "cool" -- but Senator Clinton's relentless attacks have scored points with the electorate: Many potential supporters wonder if there is substance beneath the style. Thus, Obama needs someone with gravitas. Any Democratic nominee will be portrayed as suspect on national security; Obama -- who's never served in the military and who has indeed associated with bomb-throwing refugees from the '60s (hey, who do you think lives in Chicago's Hyde Park neighborhood?) -- will have a particularly heavy burden of persuasion on this point come November. 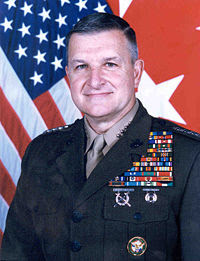 The ideal choice for Obama, therefore, might be a career military man who is on record as having opposed the Iraq war. A lot of senior military men saluted and said 'yes, sir' when given the mission to topple Saddam Hussein -- but blanched and sputtered and protested when told about the size of the force with which they were to hold the country. Some, however, thought the enterprise flawed from the beginning.

General Anthony C. Zinni, USMC retired, is apparently one of the ones who had reservations right from the start. Although born in Pennsylvania, he's teaching now at Duke. His memoir, Battle Ready, was written with Tom Clancy and, according to the linked Wikipedia entry "features stinging criticism of the planning for the 2003 invasion of Iraq and more specifically, the post-battle planning." (I'll be on the lookout for this book.)

General Zinni would be hard to marginalize, unlike fellow ex-Marine John Murtha -- who has a long voting record in Congress that could be exploited. Mr. Murtha also carries with him the lingering taint of the Abscam investigation (though he was never charged, he did testify against two other Congressmen accused of pocketing bribes). Besides, he recently charged that Senator McCain is "too old" to be President... and Murtha is older. In fact, Murtha said he was speaking from experience in making the charge.

(The linked Wikipedia entry says that Murtha enlisted in the Marines and rose to the rank of drill instructor before being selected for Officer Candidate School. After retiring from active duty in the Marine Corps, Murtha remained in the reserves, volunteering for service in Vietnam in 1966-67 "receiving the Bronze Star with Valor device, two Purple Hearts and the Vietnamese Cross of Gallantry." Murtha ultimately retired from the reserves as a colonel. This is not why he's been vilified by the Talk Radio Right; I understand that the Right excoriates his political views and associations, not his service. But I did not know these details before looking them up today; perhaps you did not either.)

There are other anti-Iraq war generals around, some of whom have already endorsed Senator Obama, and there's always General Wesley Clark, although he, of course, was an early Clinton supporter.

The problem with choosing a Vice President for "balance" is that -- like choosing a nominee for the Supreme Court -- it doesn't always work out as planned. A lot of people, wary of George W. Bush's youthful excesses, were relieved when he selected Dick Cheney as his running mate. To many, it seemed like the grownups would be taking charge again... but the polls certainly indicate that many no longer hold this view.

Next up: Unsolicited advice to Senator McCain. Believe it or not, that's tougher.
Posted by The Curmudgeon at 8:43 AM

I met that Wesley guy, and I didn't trust him.