Forever in blue jeans -- Or -- Denim of the game

Omar the Tentmaker had set up his stall in the bazaar and Long Suffering Spouse suggested that we stop there and get me some new blue jeans.

Why? Initially, I suppose, an exaggerated sense of gravitas. Ego: If I would be important, I must look important, too. What a load of road apples, eh? 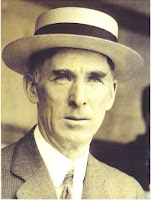 As it turned out, I neither looked nor became important. Mostly I looked ridiculous, dressed in a jacket and tie coaching youth baseball at Bluejay Park. I tried to cite the example of Connie Mack to some of the kids. Kids? The parents had never heard of Connie Mack. They didn't even know that the Athletics had been in Kansas City, most of 'em, much less Philadelphia.

At least I didn't wear suits to the park usually. I wore Dockers and a sport coat.

Dockers, I would argue, were Levis for old, fat people. Like me. And maybe, in my defense, when I stopped wearing jeans, there really weren't jeans for people with, ah, shall we say, a mature figure.

And thus a habit was begun.

But now, in the fullness of time, and given the fullness or ripeness of the profile of the average Baby Boomer, Levis have begun to make jeans in the typical (read: enormous) sizes required by today's middle aged man.

Long Suffering Spouse had picked up on the trend though (of course) I had not.

And so we had our excursion to Omar the Tentmaker's Stall (OK, J.C. Penney's -- if you must know -- though that strikes me as far less romantic).

The kids have been amazed to see me clad in denim. I was amazed to see that the once all-American blue jean is now made in Lesotho.

Lesotho?
Posted by The Curmudgeon at 6:58 AM

curmy the last time i wore jeans they were still called "dungarees"... and i have heard of connie mack.

Are you sure you aren't my former senior partner (though he lives here in Atlanta)?

Back when I was a baby lawyer, he, another associate and I were leaving the office for lunch in mid-August with a temperature and humidity in the nineties. He asked us to go back to our offices and get our suit coats.

Another time, he called me on the intercom to come to a client meeting in one of the conference rooms. When the meeting ended and the client left, he counseled me that in the future I should put on my suit jacket when I left my office.

During the week he wore only suits and white shirts. Saturday mornings he loosened up and wore a blue shirt (and tie) with a blue blazer and grey slacks.

A few years ago, I saw him wearing blue jeans. It just didn't seem right.

I know someone I am sending this to....

I think you'd be hard pressed NOT to find me in jeans...good thing I have the right job for it!

I just don't feel right when I'm not wearing jeans!

You know we love them "denims" down here!

Denim and a sport jacket are a classy dress down/casual combo for a middle aged professional. And I do like the men's clothing at JC Penney.

But what shirt? Polo, short sleeved or an oxford with button down collars (I prefer long sleeves with a jacket )?

Connie Mack always wore a suit. It's nuts that the NFL makes it hard for the head coach to wear a suit...to look nice. I couldn't imagine Vince Lombardi or Tom Landry otherwise...

I love wearing jeans, and you will too. They will make you feel young. Or young at heart.