A squirrel comes to visit 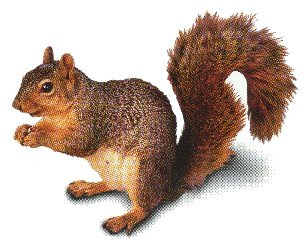 Yes, I was finishing my first post Tuesday morning when I finally decided to investigate the shrill trilling that seemed to be coming from the front of the house. I thought there must be a bird in the window.

I didn't suspect a squirrel.

And I certainly didn't suspect that a squirrel was in the house.

I wasn't dressed to receive visitors: Long Suffering Spouse had taken Middle Son to the train so he could get to his soul-crushing telemarketing job; LSS would then go on to school where she teaches one morning class this month. I was going to finish my coffee, complete my morning ablutions, maybe work on my timesheets and be ready to go downtown upon her mid-morning return. The morning post is just part of the routine -- hurried this morning because I had so much to do.

As if I accomplished anything at all....

Well, the squirrel looked at me from its perch on the windowsill and I looked back at the squirrel. I suggested that he stay put and I'd open the front door for him and he could leave. I was concerned, however, that the squirrel might misunderstand my intentions so I thought I should find something to protect my bare feet.

The squirrel did not understand my intentions and began running around the living room signaling its confusion.

After hurriedly finding Middle Son's shower shoes -- one benefit of having teens and post-teens around is that they leave shoes (and a lot of their other clothes for that matter) everywhere -- I went to the front door and opened it. I hollered up the stairs to wake up Youngest Son -- since Youngest Son and Younger Daughter are through with school they were, of course, asleep.

Here was my plan: Youngest Son would guard the stairs -- keeping the squirrel from leaving the main floor -- I would prop the front screen door open, then hustle back inside to herd the squirrel out the door.

It was a great plan.

But it turned out to be flawed in a couple of important respects. First, the screen door wouldn't stay open. Second, Youngest Son responded sleepily to my urgent summons. He didn't bounce out of bed and into shoes and guard the stairs... although he had struggled out from under the covers in time to see the squirrel finish climbing the stairs and disappear into my bedroom.

I told him to pull the bedroom door closed and stand by. I called the City of Chicago for help.

The City of Chicago has a non-emergency services phone number -- 311 -- to complement the 911 emergency number. While I deemed this situation to be something of an emergency, I had the presence of mind to realize that the City probably would not. I dialed 311. The City does have an animal control unit; you may recall it being called upon to remove the coyote from a downtown sandwich shop this past April. I asked that the animal control folks be sent to my house.

I did not think there was much more I could do at this point. I sat out on the front stoop and awaited my wife's return.

Long Suffering Spouse took the news better than I expected -- although she wouldn't go near the house. I told her that I'd called the City. "When?" she asked. "About an hour ago," I said. "Call them again," she said.

This time I found out that the City would not promise to respond today -- but would drop off a trap within 24 hours.

I didn't need Long Suffering Spouse to tell me that this would not fly.

I went inside to get back on line and see if I could find a private contractor who might remove the squirrel. I learned something very quickly: Most of the telephone numbers for critter control, listed on line as being in several different nearby suburbs, turned out to ring one man's cell phone... and he was in Crystal Lake, not a nearby suburb at all. And he told me he didn't come into Chicago. Several times. In fact, he seemed a bit peeved with me when I reached him a third time... but was it my fault that he had all these different phone numbers feeding into his cell phone?

I broadened my search to less nearby suburbs... not as distant as Crystal Lake... and I finally got lucky: No, said the man with whom I spoke in Palatine, we don't come into Chicago, but I know someone who does. He gave me a number. I dialed immediately... and got an answering machine.

But I also got a prompt return call.

Let us pause now to set the scene as we waited for Marvin the pest control guy to arrive: It was a beautiful day in the neighborhood. The noise from our 17 year cicadas was cascading in waves (they get louder and louder as the Sun gets warmer). Long Suffering Spouse was still hovering by the van, still at the end of the driveway.

By this point Long Suffering Spouse had been joined by Younger Daughter -- awake finally -- and three of the kids from down the block, ages 4, 5 and 9. For the kids down the street it was as if the circus had come to town and they'd been given front row seats: You just don't get squirrels in houses every day of the week.

The four-year-old girl and five-year-old boy were trying to persuade Long Suffering Spouse that she should keep the squirrel as a pet.

Youngest Son was still standing guard in the upstairs hallway, making sure the door to our room stayed closed. (It doesn't latch properly. An old house will have quirks like that -- these are considered marks of character... unless you're trying to sell the house... in which case they are defects that will depress the sales price.)

We'd not heard anything from the squirrel for some time. I'd begun to think that the poor thing had scared himself to death... but I suggested, and the family agreed, that we'd let Marvin conduct the investigation.

The squirrel turned out not to be dead. He'd climbed as high as he could in my room and he'd calmed down, but he got active again in a hurry when Marvin entered my bedroom with his trap and a net.

Marvin knew his business. Soon Marvin, the net, and the trap with the squirrel inside were on the front sidewalk... where it was all we could do to keep the neighbor kids from trying to pet it.

Marvin explained that this was a juvenile squirrel; that would account for the trilling or mewing that I heard. How the squirrel got in remains a mystery. Marvin said he may be part of a family group that is living amongst us.

I sincerely hope he's wrong... but Marvin is coming back Thursday to inspect the attic... just to be sure.

I won't be on line Wednesday (although this post has a Wednesday date)... I really have to get some work done. I hope to be back as soon as Thursday.
Posted by The Curmudgeon at 12:00 AM

So, Squirrel pie for dinner then?

put some nuts in a saucer and see if they are still there in the morning. well, that is if the kids don't eat them, what am i saying? sigh... i got nothing curmy, sorry...

I completely undersatnd LSS' reaction - I wouldn't go in a room with a squirrel if you paid me.

As Carrie from Sex and the City once said: "You can't be friends with a squirrel, it's just a rat with a better outfit!"

I hope he was a runaway and not part of a big happy family ensconced somewhere in your home.

I wonder how many calls the Crystal Lake fella gets each day. More interesting would be how many folks go through the same call the guy again and again on different numbers ordeal like you did...

Also, I'd like to invite you to submit your blog to the US Blogs community on Bumpzee. It's a great place to connect with other bloggers and find other great blogs that are here in the States.

A juvenile squirrel? Does that mean he'll go to reform school instead of prison?

Are you trying to tell us that you've been hoarding nuts in the attic??

Thank goodness for Marvin and his squirrel trap, eh??

When the tears of laughter stop rolling down my face and I can see again, I'll take the time to post a comment worthy of this heroic tale. Until then... Hahahahahahahahah!

Can hardly wait for the real end of the story - it is a known fact that squirrels live in community. If one squirrel is in the house - it is a sure thing that they have relatives.

This I know from stories from my sister who had squirrels eat through the dry wall in the upstairs hallway...

I hope your story has no such ending because I think the LSS would find NO humor in it what so ever...

A wonderful story told so that we could picture everything perfectly!

Great narrative! Thanks for the well-needed chuckle. Let us know what Marvin finds...

Jean-Luc -- The sound a juvenile squirrel makes is (according to Marvin) different from that of an adult -- I was not suggesting that he'd go either to jail or reform school. In fact, Marvin said he'd release the squirrel... in the far south suburbs. Which is far enough away for me.

Chris -- no squirrel pie for me, thank you!

Hilda -- I'd never heard that line about squirrels before, although I have heard them called "rats with furry tails."

And Fran, Lois -- Marvin returns today. I'm at work... and unusually happy about it. I will, however, report his findings... (or hopefully that he finds nothing!)

Cute story. My dad and mom use to feed the squirrels living in their backyard. The squirrels got so fat, the could hardly waddle up the trees when they were done eating.

I never liked squirrels. They also remind me of rats. I'll never feed the ones that scurry around in our yard.

This was a really well written story. It put me there with you...
Glad you found Marvin.