Ostrich raising, hunting over a salt lick, a blogger's challenge -- and, yes, Your Honor, I can tie these up 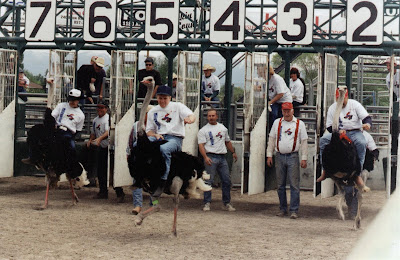 The image was suggested by my blog friend Shelly's vacation story: She reported that she'd been to an ostrich race.

So I asked her if she'd gotten a picture -- but she hadn't. Well, in light of my experience, that I shall shortly relate, I thought maybe she was telling me a tall tale. So I went out into the Internet and found this image... but I still can't be sure it's not Photoshopped or something.

See, I was under the impression that ostriches were truly skittish birds. That was certainly the allegation in a case I handled once several years ago....

My client had a buddy who owned a piece of land well outside Chicago on which deer roamed freely. If they were playing with antelopes as well it would have come as news to my client.

A lot of things might have come as news to my client. For example, he didn't know it was improper to hunt deer over a salt lick.

Deer crave salt. And if you put a block of salt out in a clearing, deer will drop whatever else they were doing and run right over to partake.

My client's friend knew this much. What he apparently did not know was that it is not sporting, and also illegal, to set up a hunters' blind above the salt lick so that he and my client could shoot the salt-licking deer like fish in a barrel.

Keep in mind that these two were not using guns to shoot the deer; they were using bows and arrows.

Meanwhile, at a controverted distance from this hunters' blind, stood a "greenhouse." This greenhouse was where the neighboring property owner was raising ostriches. (I don't really know if this greenhouse is the same kind of greenhouse in which one might raise flowers or vegetables; I have merely adopted the nomenclature used uniformly by the parties in this case long before I got involved.)

The ostrich-raising neighbor said the blind was only 40 yards from the greenhouse. A 1994 Chancery Court order recited, as a fact, that the nearest structure to the blind was over 100 yards distant. Either way, when the ostrich raiser saw the unsportsmanlike sportsmen on a crisp autumn morning, he feared for the safety of his skittish flock -- not that the hunters would tire of shooting deer and move on to large, flightless birds -- but that the hunters' activities might somehow alarm his birds and cause them harm. He sought a court order prohibiting this conduct, but the action failed because the ostrich farmer, according to the learned trial judge, did not establish a causal relationship between the hunting activity and any damage to his ostriches. (The State did clamp down on my client's buddy for the illegal hunting practice, however.)

The ostrich farmer next filed a suit seeking damages; this is the suit in which I was involved. The ostrich farmer claimed in the second suit that, on the very day he first saw my client and his buddy, his ostriches stampeded in their greenhouse, killing one. The loud *thwack* of the bowstrings apparently set the birds off. The ostrich further alleged that the following month, while preparing for the trial of the injunction case, my client's friend ventured right up to the property line, this time with a camera, to photograph the greenhouse where the nervous birds resided. The loud *whirr* of his shutter set off still another stampede, resulting in the death of two more birds. (Testimony at the injunction hearing, later incorporated into our case, suggested that it was two birds that died in the first stampede and only one in the second.)

Whatever the body count on either occasion, there were a total of three dead ostriches. And these birds, the ostrich farmer said, were worth many thousands of dollars each.

The new judge in our Law case felt that his colleague's determination of the facts in the Chancery case controlled the outcome in the case before him. He believed himself bound by the finding of no causal connection between the ostrich deaths and hunting activities next door. He therefore dismissed the case.

An appeal followed... and it was successful: The dismissal was reversed on the grounds that the second judge placed inappropriate reliance on the findings of the first.

But it all worked out in the end: We filed another motion to dismiss arguing an insufficient allegation of proximate cause in the new pleadings, even without taking into account any previous finding. The trial judge, who may have believed that the higher court had laid an egg in sending the case back to him, said he would not stick his head in the sand now: He again dismissed the case and everyone, except for the ostrich farmer, lived happily ever after. Even the deer. Because they could lick salt without getting shot at from a hunters' blind.

But, anyway, knowing what I learned in that case about the terrible skittishness of ostriches, don't I have reason to be skeptical of Shelby's claim that she saw a real live ostrich race? Don't I?
Posted by The Curmudgeon at 10:00 AM

I had an Ostrich ride when I was stationed in Africa in the 1960’s. They move fairly fast, even with a 170 pound person on their back. The problem is getting them to go in the right direction. It’s not like ridding a horse.

The one that I was on took off like a bat out of hell. Then the bird stopped on a dime for no apparent reason, throwing me to the ground. After that experience I stuck with Camel rides.

I have never heard of Ostrich Racing, but if it is true, it must be a hilarious event to watch.

hi curmie. i saw an ostrich once. so i thought i'd tell you that. see i like to participate.

bubba could show them hunters a thing or two i think too. but that is another story. for another day. about how to put apples on the ground or go to an apple tree in the fall, the deer like apples too.

Wasn't there an ostrich race in Swiss Family Robinson? Although Hollywood is scarcely above whatever would be the equivalent to Photoshopping at the time that movie was made. Personally, the closest I've ever been to an ostrich is the time my dad decided to stop at a roadside stand to try some ostrich jerky. Not the most pleasant of the dried meat family, if you ask me!

I admit to only have seen someone riding one of these birds in movies...only movies. They don't seem to be very skidish at the zoo. Who knows.

TC, you made me laugh out loud. I should've been groaning but "the stick your head in the sand" bit got me.

Whether or not there truly are ostrich races, and it appears that there may be, I have to wonder who would be fool enough to climb up onto the back of one when they are so skittish? Well, other than The Beach Bum up there who admits that he has, indeed, ridden an ostrich with a rather bumpy ending.

Large birds kind of freak me out so I think I shall stay far, far away from both ostriches and emus!

Bennie -- you laughed because the judge made the joke. It's a known fact that, in any courtroom, people laugh harder at the judge's jokes than those made by anyone else.... Certainly that's how I was trained....

I note mommasworld and Susan both mentioned the ostrich race in "Swiss Family Robinson." I don't think I ever saw the movie... but it was in a collection of Disney stories I had as a kid. It probably even had an illustration of someone riding the ostrich. I thought about that -- a lot -- when I was trying to persuade the court how dumb it was to allege that the thwack of a bowstring or whirr of a shutter could send these animals into a fatal panic....

Bee -- I think you can get in trouble with the local DNR with stories like that....

Linda -- in light of the Beach Bum's experience I agree we should steer clear of ostrich rides.