In the post below you'll find the American Film Institute's list of the top 100 movies of all time.

The Sound of Music makes the list at No. 40. 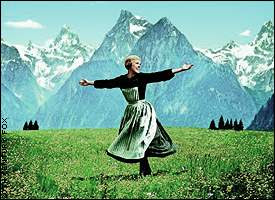 This was my late mother's favorite movie. I haven't seen it in 30 years or more -- and I still know the words to all the songs.

I remember, as a kid, going to the Coral Theater on 95th Street in Oak Lawn to see The Sound of Music. My mother took me several times. I want to say dozens of times... but I'm sure that's an exaggeration.

I became thoroughly sick and tired of that movie -- to the point where, as the von Trapps are fleeing the music festival with the Nazis in hot pursuit, well, I wasn't exactly rooting for the Germans... but I sure was hoping that they'd catch the family -- just this once.

My mother said we had to go see this movie; "otherwise," she said, "they'll never make another decent family picture."

"Mom," I said, "why should they bother? We're still seeing this one."

And then she clobbered me.

Maybe I had it coming.

And maybe they didn't make another decent family movie -- until Pixar came along with Toy Story. And every movie they've made since.
Posted by The Curmudgeon at 3:26 PM

I remember seeing at least twice on the big screen….I know all the words to the speaking parts as well as the songs….then again I have it on both VHS and DVD.

I did a tally of the top hundred and I've seen 74, unfortunately including SOM.

I developed a rule after SOM as an adult that could make a choice, a movie that has Julie Andrews, Meryl Steep (other than the Big Chill), Barbra Steisand or their equivalent, especially if Robert Redford is a co-star, should not and will not been watched.

Katherine -- "Some Like It Hot" is a wonderful movie... and I was going to say I wondered how Marilyn Monroe's costumes got around the Hays Code -- but I just looked it up in Wikipedia and found out that the movie was released without the imprimatur of the Code. I've never been a big fan of "Mockingbird" -- probably because Gregory Peck movies tended to be Important (capital "I" intended). And I've said before -- "Mr. Smith Goes to Washington" (No. 26) should be required viewing in all civics classes.

And Dave -- although I'm with you on Meryl Streep, I still recommend "Defending Your Life" (co-starring Albert Brooks). And did you ever see Julie Andrews in "S.O.B."?

I remember going to see this movie with my three brothers at the movie theater at Cannon Air Force Base in Clovis, New Mexico when I was in 7th grade. They would have Saturday matinees that were cheap so my parents would send us out with money for the movie and popcorn.

My brother Alan was so bored with the movie that he pulled quite the stunt to get out of there. He handed my oldest brother Mark an object that he said was a tooth that had just fallen out and said he needed to go home because of it. Mark told him to go ahead and go while the three of us stayed for the rest of the movie.

When we left the theater, imagine my oldest brother's surprise to find that the "tooth" was an unpopped popcorn kernel!!

Yes indeed - the hills were alive but it wasn't with the sound of music!

I too saw "Sound of Music" as a child...and that reminds me of Julie playing "Mary Poppins" - same era, I believe.

Your childhood wish to see the Nazis catching the von Trapps "just this once" made me laugh.
;-)

I'd forgotten about "Defending Your Life." Great movie. I'll have to try "S.O.B."

I actually recently bought Sound Of Music on DVD...and while I don't watch it often, I do like it. But I haven't seen it 400 times either - I probably haven't watched it since "The Wonderful World of Disney" was on tv every Sunday night in what, the 70's?

I think that your story about your mom is funny, you had a good sense of humor even then.

I do have to say, though, I'm a little sick of Wizard of Oz. I loved the books as a kid, but am sick of the movie.

This happened to me. I disliked the movie when I saw it very young. Not long after, I was punished by being made tto see it again.

I have never seen the movie again in 40 years.

I can still sing all of the songs from that movie too. ;-)

I always wanted to sing the I Am Sixteen song and run around a gazebo with someone LOL.

If it makes you feel better, look up the details of the real family. It's not quite as nice as portrayed in the movie :)

I didn't teach my kids anything about religion, but I did teach them about/expose them to movies in the same way that most parents probably teach their kids about religion. When my twin boys were 10, I got them hooked on Kurasawa films...SOM had it's place, but they were younger when they watched that, and it didn't rank up there with Kurasawa or with others, like Clouzet's Diabolique...

Really funny post. Would you believe this movie is my 17 year old son's top favorites? He asked for it for Christmas (didn't get it - perhaps next year)..

I do love it too.

Linda -- I wish I was as smart as your brother.

That has to mean something.

Sorry, that's the best I can do for an accent! Pretty bad, eh?

If you've seen Shrek the Third, there are a few little Sound of Music jokes tossed in there as Julie Andrews is Fiona's mother (the Queen).

I didn't like SOM as a child or as an adult but I, too, know the words of most of the songs. I think Some Like it Hot is a great movie and Wizard of Oz is one of my all time favorites because of what Ebert in his lovely and well written review said. Sari--take a break from the mvoie for a few years and then see it again. As with many things, familiarity brings contempt but the epic themes may catch you again after a respite from the details. It did for me.