I missed an eye doctor's appointment yesterday; I forgot about it entirely, but I wouldn't have gone even if I'd known about it.

It was that kind of day. 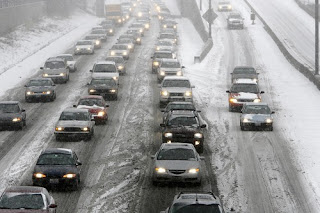 It wasn't the snow. Not that we didn't have a problem here with the weather yesterday: Younger Daughter had a Snow Day and traffic looked unusually miserable from the window of my overcrowded train.

No, I got a phone call from my internist shortly after lunch. I'd just cancelled an appointment with him too, but he wasn't calling to protest.

I'd had a colonoscopy on Groundhog's Day -- and there'd been a problem. The doctor performing the scope had encountered a virtual field of gently swaying polyps. He took a few of the more ominous looking ones -- he couldn't get them all, he said, so he had to make a selection -- and I'd been waiting for the pathology report. I was supposed to get that on Friday... but the report wasn't ready.

No problem, I thought, since I'd scheduled a follow up appointment with the colon doc, Dr. P., for Monday. He'd surely have the results by then... and, if not, he'd probably be able to get them in the course of our appointment. Sunday, however, I got a call at home: Dr. P. had an emergency and would be unable to keep our appointment. I had since rescheduled it to this Friday. But when I asked, Monday, for the pathology results, I was told that I'd have to speak to the doctor directly.

So that's why I'd skipped out on yesterday's appointment with the internist: We were to discuss the outcome of the colonoscopy, and I didn't know all of the outcome yet.

The internist had set me on the road for this latest colonoscopy. Yes, my age suggests that it was pretty near time to get this done in any event. And colon cancer doesn't just run in my family, it fairly gallops: I lost both my parents to the disease.

And I'd had my own bout with polyps 21 years ago, the problems recurring for a few years thereafter before we got everything all straightened out. Or so we'd thought. It took me changing doctors -- to Dr. P. -- to get the condition under control. And my last scope, six years back, was clean as a whistle. Clean as these things get, anyway. It was because of my history that my mother claimed she got her cancer from me: We're not scientists in our family.

The polyps I'd had two decades ago were big -- but they were benign. And I had experienced no recurrence of the symptoms that had prompted me to seek help 21 years ago. Thus, the colonoscopy was on the list of Things to Be Done -- but that's a long and varied list. But late last Fall, just before the Holidays, my internist told me I had blood in my stool -- no anemia, he said, but I'd better move the colonoscopy up on the priority scale. I did. I got it scheduled for mid-January, but Dr. P. was called away... and now you're caught up with me as I took the call yesterday afternoon from my internist. 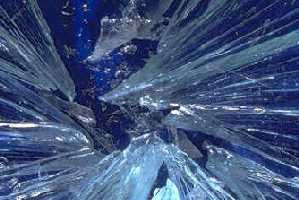 I hadn't seen the pathology results; my internist assumed that I had. He was calling to discuss the options... because one of the polyps turned out to be cancerous.

Cancer. That's a hard word to write in the first person, as in "I have cancer." But, apparently, I do. Or at least I did.

There's no indication at present that the cancer has spread from the one polyp on which it was discovered. The scope results suggest nothing, at this point, embedded in the walls of my internal tubing. But there's still that gently swaying field of polyps that needs harvesting. Soon.

Long Suffering Spouse was not happy with me. We had a chance to talk privately as she drove me home from the train. "You thought you were so clever," she told me, fighting to keep the emotions tamped down, "twenty-three years ago when you gave me a daughter for Valentine's Day. You said you'd never have to give me another Valentine's Day present again. And now... you've given me this."

If I could figure out how to return this "gift," I would.

I was so optimistic coming into this year. There was a large class of Associate Judges to be selected... I had even begun to entertain hopes that I might be among the finalists. I was not chosen (the announcement having also been made on Groundhog's Day). I answered an ad for a legal management position with a large insurer and received an interview in January. It would have meant leaving courtroom work behind, but I know that must happen sometime unless I became a judge. And the interview went well... but I was not offered the position. I found that out last week.

And now this. I have a really bad attitude at present which is probably not entirely helpful. And if I am a tad introspective in the next few weeks, I hope you'll forgive me.
Posted by The Curmudgeon at 9:29 AM

I wish I knew the right words to say to make you feel better. It sounds as if they caught this early and at the very least you know it's something you need to keep an eye on (so to speak).

Your wife sounds worried and scared and you're the only one she can take it out on (lucky you). But she wouldn't do it if she didn't care.

Cancer runs rampant in my family too and all you can do is watch out for it the best you can but nothing is guaranteed. Hopefully this is just a minor scare and you'll be fine.

My mother survived cancer. It hits like a ton of bricks.

I hope your field gets harvested, and there is no more cancereous ones lingering.

When will you know more? the waiting is sorta the worst thing.

well curmy i do know that exact feeling. hoping all goes well for you. mine is gone now but it was not fun getting rid of it. hoping yours is already gone, and it may be! we'll all be hanging around if you need us....

Well that just sucks. And not being chosen associate judge on top of it is just salt in the wound.

Hang in there. I know this is rough. My husband's best friend survived leukemia several years back. It can be done and thankfully, it appears they caught yours early.

I'll be praying for you. I may even say a rosary, which I haven't done in years...God has to give some kind of credit for that, right?:)

Been there, done that too - four years ago this coming March I was diagnosed with colo-rectal cancer. Had a tumor! I had chemo, radiation, surgery to resection the colon, more chemo and the biggest problem out of the whole thing was the two discs that herniated somehow about two weeks after the surgery! Go figure! Since then, I've had surgery on the urinary tract to skirt around an obstruction and a scare this past August with a colonoscopy that appeared to be malignant. Ended up having a colostomy in October because the mass found in August couldn't be removed - although all tests said it was benign. Colostomy is not a nice thing exactly to have but yet it is when it removed the constant cramping in my right leg from a pinched nerve they think from the "mass" in the colon. But, the good news out of all this - a PET scan done in December shows no trace of cancer and also - no trace of the mass now either. THe surgeon who did the colostomy felt the mass had been caused by an infection that sort of went a bit rampant and apparently he was right! So, hang tight! Cancer is no longer the immediate death sentence it was once upon a time. I do know that as both my parents succumbed to it too so my medical history is pretty full of it there! Hope yours is gone now or will be completely eradicated with the removal of the rest of the polyps!

Keep positive Curmudgeon, get as introspective as you like - it's good to do that sometimes.

You know it's never good when the pathology reports aren't back when they are suppose to be. You just know they are checking and re checking....oh dear Curmudge....what a day for you....my heart goes out to you ...do whatever you need to do to get through this.....I will be thinking about you.

Don't worry, maybe you will be luckier next time. Your good health is more important. At least you can write down your feelings and get them off your chest.

I sincerely hope that they got all of it or, if not, that they can get back in there and remove that field of swaying polyps and any malignancies that may be swaying along with them.

Reading this made me feel rather guilty about the colonoscopy that I blew off a couple months ago (I had pretty severe anemia and even though I had just had a whistle-clean colonoscopy two years ago, they thought another might be in order) but I'm not sure if it's enough to make me reschedule just yet. I have totally crappy health insurance and to repeat a procedure that I had a short two years ago just doesn't seem to make sense to me.

Also, even though I have babbled on way too long already, I just wanted to say that I think it is very admirable of you to post something this close and personal. I think it's great that you can share this and I hope that by doing so it helps take some of the heaviness off of your mind.

DO keep us posted on your progress and prognosis.

I have a slip of paper in my desk drawer that my doctor gave me to call and schedule a colonscopy. I think I'll call them. Soon. A year and a half ago I had several polyps removed and one was labeled pre-cancerous. I'm supposed to do it every year now until it comes back clean.

I feel for you... I really do. I pray that they got it all. If there's anything we can do..

No words can make it easier. But some words, can show you are thought highly of and cared for.

We are all here for you. As someone said to Skittles this week, you are real. Posting (or journaling as I like to think of it) makes you real for us and because you are real, we feel your pain and we offer our support.