Somebody should tell Al Gore about this 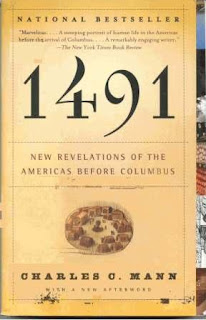 I've just finished reading 1491 by Charles C. Mann. I recommend it to anyone who is concerned about the environment. That should mean everyone.

The basic, overarching theme of Mr. Mann's book is that American Indians did not 'live in harmony' with nature, they engineered it -- and often in ways we (for all our technical sophistication) can only dream of doing.

If Mann is right, Indians were far more numerous, and were in the Americas far longer, than we were taught in school. There may well have been settlers who came across a land bridge in what is now the Bering Strait, but they may have been only one of several waves of immigrants to these shores.

Mann cites the accounts of early explorers who report huge populations in many places in the Americas -- in Mexico, along the Amazon, along the California coast, and in what is now New England. But 130 years after Columbus, when the Pilgrims land at Plymouth Rock, the landscape has changed. It is largely deserted. The native population had already crashed, victims of diseases spread by the earliest explorers for which the natives had no immunities. (Diseases that may have been spread not just by explorers but by the livestock they brought with to support their expeditions.)

What later colonists saw as a pristine wilderness was, in effect, an untended garden. The gardeners were mostly dead. Mann quotes historian Stephen Pyne, "The virgin forest was not encountered in the sixteenth and seventeenth centuries... it was invented in the late eighteenth and early nineteenth centuries."

The passenger pigeon, famous symbol of American abundance, whose incredibly large populations were remarked upon by Audobon and so many others, may really have been a sign of severe ecological disruption: It's numbers soared unchecked because of the collapse of a keystone species in the ecology -- homo sapiens.

Mann writes about scientific research which shows that Indians genetically engineered maize (corn) and spread the cultivation of the crop throughout the Americas; that Indians supported huge populations with terrace farming in the Andes; and that Indians created a new soil, terra preta, to replace the naturally poor soils of the Amazon jungle. (The 'slash and burn' agricultural tactics now favored by indigenous peoples in Amazonia may be the product of the introduction of Western steel axes, not a survival of an ancient practice at all.)

It is not that the Indians changed their environments, so much as they improved them -- and improvement in this sense means that the Indians made the environment more useful for themselves. As Mann puts it, "Faced with an ecological problem, the Indians fixed it. Rather than adapt to Nature, they created it." Thus, early American settlers in Ohio were amazed to find forests in which they could drive their carriages -- but, if Mann is right, these were managed forests and the undergrowth had been kept at bay by the original inhabitants. The Amazon jungle was also a managed forest. The Plains Indians managed the Plains -- using deliberately set fires, among other things.

Actually, fire is essential to the life cycle of many prairie plants. Maybe it's because of the Indians' encouragement of these species; maybe it's not. But when the local forest preserve district here in Chicago proposes a controlled burn in a forest preserve to encourage the growth of native plants and eliminate the invasive species that have escaped our gardens and threaten to take over the woods -- the local environmentalists howl.

Not every feat of American Indian engineering was a resounding success.

The Cahokia Mounds in Southern Illinois may be proof of a spectacular environmental failure -- a cautionary tale for those who would bend Nature too far.

And Mann warns against the 'dialog of the deaf.' Writing about the Amazon basin, Mann says, "European and U.S. environmentalists insist that the forest should never be cut down or used -- it should remain, as far as possible, a land without people. In an ecological version of therapeutic nihilism, they want to leave the river basin to its own devices." Mann finds, however, that Brazilians seem less than enthused by this plan: Summarizing the Brazilian position, Mann writes, "To develop your economy, you leveled your forests and carpeted the land with strip malls. Why can't we do the same?" When the Brazilians talk of the need to help their own poor, environmentalists respond by insisting that cutting down the trees will not create wealth but will "only destroy the soil. Turning Amazonia into a wasteland will help no one."

Maybe both sides should be quiet and listen for the voices of the past. If the Amazon basin really supported teeming millions in the past, how was it done? The forest was there; if people were there, too, doesn't that offer us hope that both people and forest can survive there today as well? And what fate befell the Maya? Did they collapse because they overstretched their environment -- or were they victims of climate change? Getting answers to these questions may be critical to our own futures.

Consider adding 1491 to your reading list.
Posted by The Curmudgeon at 9:42 AM

I think you have to live close to nature to understand it and fully respect it. There are still many sceptics on this subject in the UK, I am going to a major conference about it in Cambridge on Friday.

I agree; what happened in the past are keys to our futures.

Thanks for your report. I must read this book.

I'm going out to get it this evening! Awesome stuff, TC.

In reading your review, so much of this seems to make such perfect sense that I am surprised that the enviromentalists haven't figured it out for themselves.

I guess part of the problem is that we still like to think that we were the "first" when it came to this country/world of ours. There was virtually no one here when we got here so how could there have been anyone else here before us? The arrogance of the explorers was quite amazing if you think about it. And the arrogance of the early Americans was even more astounding. Manifest Destiny indeed!

I very much appreciate your comments today on my blog. Thank you.

I like this post very much. I haven't read the book, sounds extremely intriguing - it sounds like one that my dad told me about recently. If not, I'll pass on that title to you. Take care.

Thanks for the comments on my recent blog posting re: Clear Lake and all its female psychopaths;)

About Clara Harris: whether she ran over her husband once or multiple times is actually up for debate. Some witnesses claimed it was once, others said it was 3 - 5 times. That was one (of many of course) issues in the trial.

Sounds fascinating.
I'd always understood that that the native americans used fire in the plains, not sure where I picked that up from though. We don't do much US history over here.

Thanks for all of your comments; if any of you do read this, maybe you could let me know what you think?

And, Fence, we don't do too much U.S. history over here either. (And Mann says fire was used in the Plains, the forests and the jungles -- and in the jungles it was not slash and burn, but slash and char. That makes a big difference in terms of the carbon released into the atmosphere... and the quality of the soil.)