Weekend update -- a Southern drawl isn't what it used to be... fake fake-furs... and chimps

It's been a busy week, trying to get ready for the week ahead, and I'll probably talk about that soon enough. But, in the meantime, just a couple of quick observations about things I couldn't help but notice in the days just past. 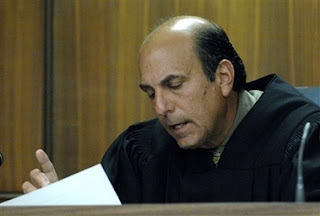 I've managed not to mention Anna Nicole Smith here (until now) showing I have some standards, however minimal. I mention her now only because of this man, Judge Seidlin: I thought Southerners had a different accent. 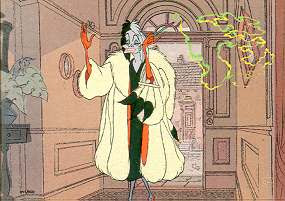 Here's a story that only Cruella De Vil could love: The AP reports today how some retailers are scrambling to pull their "fake fur" coats -- because the coats turn out to be made from dog fur instead.

According to Kasie Hunt's story for the AP, The Humane Society of the United States purchased 25 coats from stores like Nordstrom. The coats carried fancy designer labels; Ms. Hunt identifies Andrew Marc and Tommy Hilfiger as examples and I'll have to take her word for it. Most of the coats were imported from China.

The AP story says that three of the coats — "one from Tommy Hilfiger's Web site ShopTommy.com, one from Nordstrom.com and one from Andrew Marc's MARC New York line sold on Bluefly.com — contained fur from domesticated dogs. The others had fur from raccoon dogs — a canine species native to Asia — or, in one case, wolves. The single correctly labeled coat was trimmed with coyote fur, but it was advertised as fake."

There is no truth, however, to the rumor that Disney is now storyboarding another 101 Dalmatians sequel, Cruella in Cathay. 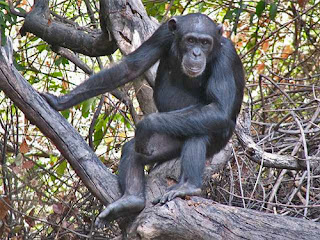 The Chinese are fortunate indeed that they're using dogs for their fake fake-fur coats; they might have had a fight on their hands if they'd tried using chimpanzees instead.

At least, according to Rick Weiss' story in this morning's Chicago Tribune, chimps in the West African nation of Senegal have learned to fashion rudimentary spears and are using them to hunt bush babies.

Weiss, summarizing an article that is now online in Current Biology, reports, "Using their hands and teeth, the chimpanzees were repeatedly seen tearing the side branches off long straight sticks, peeling back the bark and sharpening one end" and then violently thrusting these weapons into the tree hollows where the unsuspecting bush babies sleep.

And it's female chimps that are the toolmakers, according to the story. The story suggests that these observations provide support for the "long-debated proposition that females... tend to be the innovators and creative problem solvers in primate culture."

I think I've just been insulted?
Posted by The Curmudgeon at 7:32 PM

If you ever read the book - The Dance of the Dissident Daughter by Sue Monk Kidd, you may have a whole new view of God's gender. It was a most amazing description of the origins of the word Logos and proceeds from there... while you are mending I highly recommend it, definitely written for women but enlightening for all readers.

I read that women created the spoken word.

Apparently, the men were out hunting mammoth jumping and gesturing wildly but silently while the women were back at the cave gabbing while fixing the broken tools....

well yea women! aha! that's what i though all along...

As for that judge who apparently lost all control of his emotions during the circus that has become the end of ANS's life - I thought he was supposed to be a former cab driver from New York City or something? Of course, I only caught that in passing as I've been trying real hard to ignore that whole fiasco. Pathetic what passes for news these days, isn't it???

Those Chimps aren't the cute, cuddly little things we'd been led to believe!

As for females, males - it's probably because the males were the hunter-gatherers???

An excellent round-up of the absurd - and please, do write a post on the Nicole Smith custody battle over the child, if not, I shall.

I do hope you are bearing up to your op, am thinking of you here in the UK.

And I thank you from the bottom of my heart for leaving AN-S OUT of your blog lately! And believe me, as the owner of a REAL Southern accent (by way of Texas), I can assure you they do NOT sound like THAT!
Best of luck Wed, you're in my thoughts and prayers.