A stunning lunch time incident in a high school cafeteria 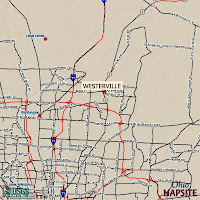 High school students in Westerville, Ohio must need more homework. Or maybe streaking is coming back. Consider this story reported by the AP on January 29 concerning an incident in the Westerville North High School Cafeteria. (The link is to the CNN website.)

A Westerville student, Taylor Killian, stripped off his clothes, greased himself up, and ran through the school cafeteria "screaming and flailing his arms."

The story says that Killian was also sporting long hair and a full beard; it does not say whether these were his own, or whether he was disguising his more usually visible parts.

Either way, the police officer assigned to the cafeteria didn't recognize him as a student.

Is this the norm now? That police officers are assigned to school cafeterias? If you eat your peas with a knife are you at risk of arrest?

But I digress: The story continues that police officer didn't recognize the hairy, naked, greased up student because the police officer was usually assigned to a middle school.

I don't know why that's relevant. I mean, if the regular police officer had been there, would he have looked up and said, "Oh, that's just crazy Taylor again," and gone back to his crossword puzzle?

Substitute cop or not, when young Taylor failed to heed an administrator's call to stop (apparently by making "a sexual gesture"), the police officer intervened and tasered the kid. (The AP story says only that the police used a stun gun; that the stun gun was in fact a Taser is ascertained from a UPI story on the incident. Lest you think that the Curmudgeon does not exhaustively research these stories.)

Stun gun or Taser, the kid was not stopped by the first jolt. He got up and kept running, and had to be stunned again. The second jolt did the trick; Taylor's run was terminated. The UPI story quotes Police Lt. John Petrozzi as saying "His exposure, no pun intended, was very limited once he was gotten under control."

The policemen in Westerville have Tasers and a sense of humor. Although they did put Taylor in jail, charging him with "inducing panic, public indecency, resisting arrest and disorderly conduct."

Well, actually, they'd already 'charged' him with the stun gun. So these would be additional charges.

The AP story also says that school officials said there was no indication, in Taylor's case, of a medical problem or substance abuse. Other, of course, than his stripping naked, greasing himself up, flailing his way through the cafeteria, and not staying down the first time he got hit with the stun gun. Unless that's just the way those kooky, nutty kids in Westerville usually let off steam.

Is there some way to blame this on trans-fats or something?
Posted by The Curmudgeon at 10:10 AM

Email ThisBlogThis!Share to TwitterShare to FacebookShare to Pinterest
Labels: Education, News and Views

At least he wasn't shot I guess.

Curm: Should I stay up to 3am watching the Bears on Sunday? I watched the last one 21 years ago, and I don't want to have to wait another 20 years....

yes my first question is....is that what we have come to...police officers in cafeterias....and why on earth if the kid didn't want to get caught of an escape route out?

that's all I can say about that!

The use of tasers on people is getting out of hand. Someone's gonna get hurt.

They should've just let him streak on out the other side of the room and leave.

I don't get it, the streaking or the taser guns.

and if you really ask that kid, he would probably roll his eyes and say "geez people, i was just BORED!

He was probably loaded up on venti mochas from the Starbucks.