Sergeant Manhart stripped... of rank... the first true sign of Spring... and voices from beyond... the realm of common sense

Headline writers must live for stories like this: Yesterday came word that Sgt. Michelle Manhart had received her punishment from the military for posing in the altogether in a recent issue of Playboy magazine. The link is to an AP story by Elizabeth White. White reports that Manhart has been, uh, busted in rank from staff sergeant to senior airman. She's also been "removed from 'extended active duty.'"

Manhart is quoted as saying she's "disappointed in our system." The Air Force, in her view, "went too far with" her punishment.

And the saga may not be over: Manhart was a member of the Iowa Air National Guard before going on extended active duty. Termination of that duty status means she reverts back to the Air National Guard. Oscar Balladares, a spokesman for Lackland Air Force Base, is quoted in White's article as saying, "It is not up to the Air Force -- it is not our jurisdiction to discharge her."

So Manhart has tendered her resignation to the Iowa Air National Guard. But Lt. Col. Greg Hapgood, a spokesman for the Iowa National Guard quoted in the AP story, said that because the Guard did not have "documentation of her separation" from the Air Force, it did not have her on duty status.

Sounds like the Iowa Air National Guard wants to conduct its own investigation. And I'll just bet that the necessary "documentation" will include the magazine in question... and all the outtakes... and the negatives.... 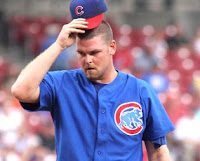 Meanwhile, pitchers and catchers are reporting to major league training camps in Arizona and Florida. And the Chicago Cubs have opened camp, too.

This is a tough week for White Sox fans like myself: Our pitchers and catchers do not have to report to Tuscon until tomorrow; Cub camp opened Tuesday. So for days now we've been bombarded with Cub bombast by the Chicago media.

But there is one sure sign of Spring in all of this: The first injury to a Cub pitcher. That's Kerry Wood pictured above (You were expecting ex-Sgt. Manhart?). The photo is from the Bloomington Pantagraph; this is a link to the AP story in that paper this morning: It seems that Mr. Wood managed to injure himself getting out of a hot tub in his home. He'll be out of action for the better part of a week.

If you're not from Chicago, that may not be the funniest story of the day -- so how about this story, from New Mexico? Proving once again that there is virtually no idea so idiotic that a government will not waste money on it, the State of New Mexico is spending over $10,000 on talking urinal cakes.

The link is to an Albuquerque TV station; there's a video of this story available there.

The urinal cakes (500 of them at $21 apiece) are being distributed to bars in New Mexico. When a patron steps up to use the urinal for its intended purpose, the cake declaims, "Make the smart choice tonight don't drink and drive remember your future is in your hands."

Your what is in your hands? (And don't blame me for the total lack of punctuation in the foregoing quote; I cribbed that from the KSDK NewsChannel 5 site without change. In television, no one can tell that you failed fifth grade English.)

There may be other pre-recorded messages as well: In clicking around this morning, I've seen several messages; I heard some others on the radio this morning. I am certain that these messages can't all be for real.

This might be one of the actual messages: "Hey, big guy. Having a few drinks? Think you had one too many? Then it's time to call a cab or call a sober friend for a ride home." However, I have my doubts about whether this is an actual message: "Heh. No wonder you drink."

Oh, and did I mentioned that the disembodied voice rising from the urinal is female? That is so wrong on so many levels I can't begin to list them all.

Let's settle for the safest: Women sometimes go to the powder room in groups. Presumably conversations ensue. But there are places and times when a male does not need or want conversation.... The State of New Mexico hopes that men will hear these messages and avoid driving drunk. What I'm afraid will happen is that even more accidents will occur, as drunks with full bladders race home rather than face a talking toilet.
Posted by The Curmudgeon at 9:56 AM

I honestly don't know what to think about Ms. Manhart. I'm still scratching my head on that one.

Talking urinal cakes? Man, that would make me want to drink just so I could get them to talk.

Ok, first off I think the term "urinal cake" is one of the most absurb thing I have ever heard in my life and would like to knock the clown who thought of it upside the head! Cakes are meant to be tasty treats not smelly disks that men urinate on! And now to have them talk ... in a female voice no less ... who is the idiot that thought this up??

Only in a men's room ... thank goodness!

Hey Curmudgeon...you know, I don't think those urinal talkies will make any kind of difference. Here in Canada, there are graphic warnings with graphic pictures on cigarette packs and hellbent smokers couldn't care less. I think the same rule goes for heavy drinkers...they'll tune it out after the novelty wears off.

I have no idea what a urinal 'cake' is. I lead a sheltered life. I know what urinals are...

That is hysterical. And yes, that has got to be the worst idea. Wasn't there something like that in that movie with Arnie, that whole, he woke up in the future thing and there was no toilet paper?

I.m sorry to hear that you are a White Sox fan. As I am an avid Cubs fan.
I read the same article about the urinal cakes and planned to write a witty post about them.
You beat me to the punch!
The Beach Bum

I'm sure that magazine will have to be viewed very carefully in the investigation.

One of the nicest things about living in Arizona (besides the beautiful winters - it's in the 70's here now) is Spring Training.

Of course, that is if you're a baseball fan. If you're not, well, then you don't care.

Lets all take a moment to think about the photos that brought about her downfall...

Thank god i can gloss over your erm fixation with certain photographs and get to a more serious issue of urinal cakes! urgghhhh!
This reminds me of something else, the one good reason for keeping smoking in pubs, when visiting sister in Scotland (where they have banned smoking in all public places), we went to her local and because there is no smoking anymore there is an unmistakable smell of P*ss! in the pub and not just the toilets!

oh puleeezzz. Really? Female talking urinal cakes....(I can't even type that without cringing and scrunching up my face)

Besides...you gotta know that these will be STOLEN long before they are used up.