This is a picture of Kevin Federline, copied this morning from the website of Nationwide Insurance Co.

Mr. Federline was briefly famous under his married name, Mr. Britney Spears. He leapt at the chance to become Mr. Britney Spears when the opportunity presented itself, forsaking a woman with whom he had already sired two children without bothering with the niceties of matrimony. If memory serves, he dumped the mother of his two children while his erstwhile lover was carrying the second. He then went on to sire two more children with Ms. Spears.

Not surprisingly, the clock ran out on Federline's 15 minutes of fame as soon as Spears dumped him. His debut rap album sank into oblivion immediately upon release. A celebrity-hungry public that was intrigued by photographs of Ms. Britney Spears with, and then without, Mr. Britney Spears forgot all about him when Ms. Britney Spears was photographed without something else.

If you don't know what I'm talking about, look it up.

Somewhere in the middle of all this, Federline hooked up with Nationwide Insurance. Creative timelines being what they are, the insurance company may not have known that Federline and Spears would be divorced by the time of this year's Super Bowl. Even if the insurer did know of the marital difficulties, it probably didn't figure on Federline so quickly and thoroughly being dropped from the public's imagination. But as the Super Bowl neared, the insurer was stuck with a huge investment in commercial air time and a "star" whose star power was entirely extinguished.

So the insurer and the insurer's ad agency cobbled together a creative concept: They would have their star shoot a rap video... with a "surprise" ending as the manager of a fast food restaurant exhorts fry cook Federline to stop daydreaming and return to his duties.

So the ad agency had to remind us -- the gullible American public -- who Federline was so that we would "get" the joke behind the joke, that being that the formerly famous Mr. Federline may soon have to secure employment in a fast food establishment unless he able to resurrect his former career... as a pizza delivery person.

Oooooooh. Controversy. The papers fell right into it -- reporting it just as if were actual news -- so by the third quarter of the Super Bowl, when the ad finally aired, even frumpy middle-aged people such as myself were "in" on the concept.

Now, I'm speculating about what Nationwide knew and when it knew it. However, although there's no telling if Nationwide will sell more insurance because of it, there is no question that this marketing ploy worked brilliantly -- and certainly with less disruption and public panic than the marketing strategy employed on behalf of these three desperate characters. These are the stars of the "Aqua Teen Hunger Force" whose movie ad campaign somehow managed to shut down Boston last week: 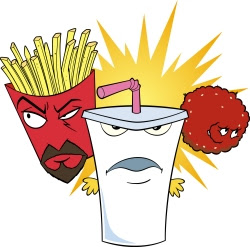 But that's a story for a different day.

(And thank goodness for the Super Bowl commercials. There's something to talk about today besides the game.)
Posted by The Curmudgeon at 9:38 AM

The "controversy" around this ad is kind of boggling to me. I can't think of how many times fast food jobs have been made fun of in various ads and movies. Is Federline so offensive that they don't want to be associated with him?

You couldn't make it up, could you, it all happens your side of the pond. We do have a rather bad outbreak of bird flu, though.

As if all that cold weather you're getting isn't bad enough, it's really sad that Da' Bears lost the game.

It WAS a good game though. One of those anything could happen games for most of it...

Yes, my condolences to my favorite Bears fan. I'm still wondering why Chicago abandoned the run so early.

Oh yeah, one more possibly controversial thought. Working for the fast food industry these days is just about equal to being a drug dealer so I have NO sympathy for their plight.

Well i knew who he was, but nothing about the so called controversy and i cant say i am glad to know about it, he is a plonker!
I found a picture of you! check out my 2000+ visitor post.

On the bright side, that should be the last we hear of K-Fed!

I don't know...the whole "Even a Caveman could do it" campaign wherein the cavemen are insulted by said concept seems to be working for Geico.

That said, it's a big mistake to hire K-Fed to do anything other than look like the idiot and immoral character he is and likely always will be. That guy creeps me out. {{{shudder}}}

I didn't know about the uproar from the fast food industry. I didn't think any of the commercials were all that remarkable.. kind of a letdown.

Um.. sorry about your Bears. *running away*