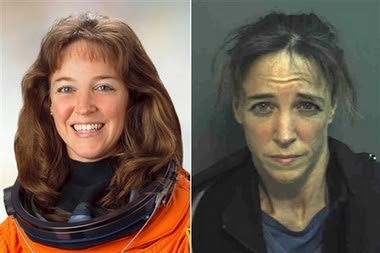 Zay N. Smith, in the Quick Takes column in this morning's Sun-Times, made a joke out of it:

All together now: An astronaut who isn't a flight risk?

And it's a good line, which I wish I'd made up all by myself.

But the tawdry story of Lisa Nowak's love triangle and apparent disintegration provides a kind of metaphor for NASA and our space program in general. 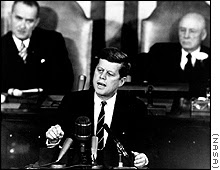 President Kennedy set this nation on course for the Moon in 1961.

Neil Armstrong and Buzz Aldrin got there in July 1969.

But we didn't stay.

In December 1972 -- nearly 35 years ago -- the Lunar Module Challenger lifted off from the southeastern rim of Mare Serenitatis with Harrison Schmitt, Eugene Cernan, and 243.6 pounds of moon rocks aboard. It was man's last trip beyond low Earth orbit.

Low Earth orbit: That's where the Shuttle goes. That's where the International Space Station flies -- at an altitude of around 191 nautical miles -- about 220 standard issue land miles. That's not much more than the distance between Chicago and Indianapolis (pulling two city names out of the air entirely at random). By comparison, the distance between Earth and the Moon is about 240,000 miles.

The human race got to go clear cross town once (actually, eight times, including six Moon landings) -- but we've been stuck in our backyard ever since.

We have this amazing astronaut corps -- stars among stars -- overachievers among overachievers -- each of them whip smart, brilliant. Use any superlative you want to use and you'll be understating the case.

And we're letting these wonderful people languish. We're letting them go to seed. We fly a Shuttle with 1970's technology. It goes nowhere special. We send our best and our brightest to install plumbing and electric on the space condo.

I suppose it was only a matter of time before the deterioration showed through: Bad things will happen if you keep a race horse hitched to a plow for too long.

The astronauts are the risk takers, the ones who would lead us to the stars if we would only let them. But we hold them back and hold them down and fret about every little thing. We live in a world so timid and fearful that we recall a million Easy Bake Ovens because five careless kids got burned.

So I'm sad today for Lisa Nowak. I'm sad for NASA. And I'm sad for all of us. We're all stuck here in our backyard with no likelihood of kicking open the gate any time soon.
Posted by The Curmudgeon at 3:30 PM

think it has anything to do with that 300 mile high club curmy?

I've been reading about this in the paper and I don't even know what to say.

The difference in those two pictures, only about a year, right? (of Lisa, that is).

People...Enough with the love triangles in Clear Lake!

I swear if one more psycho woman comes out of Clear Lake, Texas (where NASA is for those who don't know) I am moving! I live in a suburb of Houston, about an hour from Clear Lake.

First, we had Clara Harris, the dentist who ran over her philandering husband in the parking lot of the Clear Lake Hilton. Personally, had I been on her jury, I wouldn't have convicted her, but that's just me.

Now, we've got Lisa Nowak who should change her name to "Now Whacked."

It's a regular Young and the Restless down there...or perhaps it should be Another World.

I'm not a shrink (but goodness knows I've been "shrinked" enough!), but it seems that anyone who struggles to be "the best that they can be," (stealing slogans, I know), can act out in various ways, such as anorexia, bingeing, or other OCD behaviors that should've been picked up in a normal psych eval. Undo pressure can cause a person who is in an extreme occupation to suddenly slip a neuron or two.
~~~~~~~~~~~~~~
I think you hit the nail on the head about our space program. We've got to have the technology for the future. I've been watching the programs on cable about the things they're already working on such as an elevator that will be capable of reaching a space station! Fascinating!!!

Very good points C, and all too true.

Have you ever read Voyage by Stephen Baxter? It's an 'alternative history' novel which shows how things could have been different, had Nixon committed to a Mars mission instead of the Shittle. It's no piece of fantasy, and shows how we could have launched a Mars mission in 1986. good read.

Saw Buzz Aldrin on a UK chat show last night - they don't seem to make em like that anymore...

Lawfrog -- didn't the dentist back up the car and run over the husband again? (I'm thinking that might have been a fact that hurt her with the jury....)

Chris -- I've read a lot of Baxter, but not that one. I'll look for it. Did you read Baxter's "Titan?" I think it came out about 10 years ago -- but it is all too plausible, particularly in light of recent events. And oh so very dark.

Whatever happened to the days portrayed in the movie The Right Stuff???

Voyage is excellent, you'll enjoy it, but it's plausibility will infuriate you given the state of reality...

Titan is excellent, I'm just about to re-read it. I'm doing a lot of re-reading at the moment, I also enjoyed Buzz Aldrins novel 'Encounter with Tiber'. Again, the plausibility of the real-world science makes you think 'if only'.

This a true sad story. Good tho that nobody was hurt.

I HATE seeing NASA troubled with this mess. Having lived with space travel almost my entire life, this situation absolutely stinks. I grew up in Webster and later in League City, Tx while both of my parents worked for NASA and NASA contractors (we left there to go to Huntsville, AL - where my dad works to this day with a colleague of Werner Von Braun.

In Tx, I went to school with space cowboys' kids. My parents both were called out to work 'round the clock at their respective posts during the Appollo 13 crisis- as did MANY people, trying to get those guys back home with enough air to breathe. Goshamighty how I wish Americans these days appreciated the importance of risk, defense, security and technology - all those things that make us a, no, THE superior nation.

I should stop before I say something stupid - I've gotta focus for school.