Older Daughter called yesterday afternoon with news. She'd been to a wedding in Pennsylvania over the weekend and, on the way, her traveling companions had stopped off at Gettysburg. Older Daughter even went into the cemetery with her boyfriend and her boyfriend's parents.

Now this may hardly seem newsworthy to you, but I can assure you it was. And this is an appropriate time to explain why it was, too.

Today is the anniversary of the end of the Chicago Fire -- the fire that probably wasn't started by Mrs. O'Leary's cow after all. 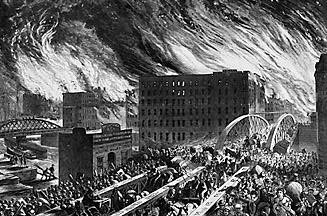 The Chicago Fire got all the publicity (the above illustration first appeared in Harper's Weekly -- this reproduction is borrowed from the Chicago Historical Society web page), but there was another, even bigger fire that also started on October 8, 1871 and destroyed the town of Peshtigo, Wisconsin -- and a couple of towns in Michigan besides. Far more people died in the Peshtigo Fire -- four to eight times as many -- as did in the Chicago disaster.

Now come back with me about 10 years or so. The Curmudgeon family was engaged in one of our frenetic mini-vacations: I was supposed to have the week off, but I worked Monday and Tuesday, and we had doctors' appointments or something on Friday, but we were determined to go somewhere. And so we did. We went around Lake Michigan in 68 hours. With five kids. 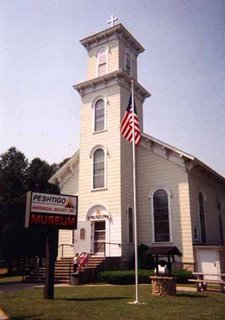 When I saw the sign for Peshtigo, I knew we had to stop. I knew about the Peshtigo Fire (I'm a history geek), but I didn't know much, and I'd certainly never been to the site.

The fire museum is pictured at left. The nice old lady who had us sign the guest log and showed us around was particularly pleased to see people from Chicago. (If she was representative, they really are still sensitive up there about the difference in the attention paid to Chicago and Peshtigo after the fires were struck.)

After we had gone through the museum and seen what there was to see, the nice lady asked if we'd like to visit the cemetery next door.

It seemed appropriate to go in and pay our respects. The 'attraction' at the cemetery is the mass grave of 350 people -- the grave contains whole families wiped out in the conflagration, with no one left alive to claim their bodies. The mass grave is pictured below and on the right. (For any fellow history geeks, the Peshtigo photos are taken from this site.) 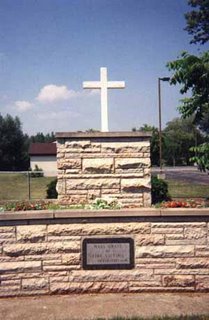 But Older Daughter would not come in. She wouldn't budge.

I've made reference here (and I've recently seen some of you echo this belief on your own sites) that the Irish see the borders between this world and the next as a bit more porous than is generally accepted. Older Daughter is only half-Irish -- but, looking back, I guess this was just her way of handling -- or not handling -- a boundary that she felt to be particularly thin. As of course it probably was.

When we went to Springfield, Illinois to see all the Lincoln sites, Older Daughter would not go with us to see Lincoln's Tomb. In fact, I can't remember a time before my parents' funerals when Older Daughter would voluntarily set foot in a graveyard. So yesterday's call was big news after all. Now do you see?

I don't want to overdo this Irish mystic stuff.

First of all, the Irish wouldn't have me, my bloodlines notwithstanding.

I'll give just one illustration and save the rest for another post: I was driving along the road one day to court in Joliet. And the Sun came out from behind the clouds and there was, briefly, a vivid, glorious rainbow.

I'm Irish enough to know that this was certainly an omen. But I'm so thoroughly Americanized, I was willing to believe that it was a good omen.

why? i thought about this and searched it out and all i can find is the rainbow is a good omen.

oh, and could you please blog a little more often? i get so tired of having to pop back in all day to check it out. do you mind?

I second that motion, Counselor.

We have a third, and I believe that ratifies it...

I love the Irish mystic stuff, being part Irish myself. About all I truly KNOW, is that one of my McCormick ancestors got over here on a boat sometime in the 1700's. Which boat, exactly what year, and from whence in Ireland I couldn't tell you. And if the Irish wouldn't have you, I'd like to know who would, pray tell? As far as I can see, you're about as Irish as the shamrocks in County-Mayo-God-help-us.

From personal experience, I can tell you that good luck is almost a requirement upon doing business at the Joliet courthouse regardless of which side of the aisle you're on. Additionally, you'l not hear much in the way of superstition from my family which has longstanding roots as Irish Catholics from the South Side (they're awaiting a dispensation so it'll be okay to include Cory Lidle in their prayers...Yeah, that South Side).