Invitation to the dance 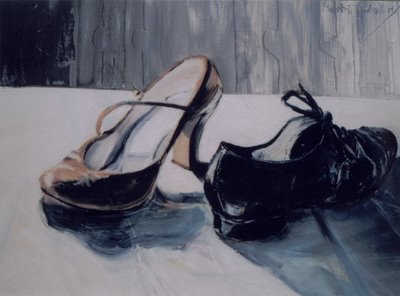 This image was captured for today's essay
from the Marti Weidert Studio website and the
link is therefore, what, a guilt offering?
I had to drive last Friday -- I mentioned that yesterday -- and my business purpose (if the IRS is reading) was to pick up and transport a file from the office for a client visit on Monday morning. (Too much to carry on the train.) Of course, there are always additional -- not alternative -- motives: Long Suffering Spouse had to leave with Youngest Son at 5:30 am for an all-day field trip to the Wisconsin Dells (she wasn't expected back before 11:30 pm), so I lost my ride to the train in the morning. But there was one thing of which I was certain: I did not need to drive to get home early to supervise Younger Daughter's preparation for the Fall Fling Dance at her all-girls school.

No. If there was one thing I knew for certain after I dropped off Younger Daughter Friday mornning (she's still getting her practice hours in, driving me to school) was that she was not going to Fall Fling.

Oh, I knew she wanted to go. Fall Fling was the last of the Grand Slam of Homecoming dances at the local Catholic high schools, two boys' schools, one co-ed school, and Younger Daughter's. At the start of the Homecoming Season, Younger Daughter had elaborate plans about who she'd take and who'd take her to which.

These plans fell apart when one boy in whom she was interested said he "didn't want to hold her back" and said she could ask someone else.

By the way, none of these conversations take place live and in person. All are conducted on-line, through the good offices of one or another instant messaging system. Teenage girls, however, do still talk to each other on the phone -- mostly about IM-conversations and messages left on Facebook "walls."

As blow-off lines go, I thought this one was better than one Older Daughter received at about the same age, when a boy she asked to a dance told her he had "to visit his grandmother." That sounds like the kind of lame excuse I would have come up with when I was 16. Awful.

But a blow-off line is still a blow-off line. And there was one boy who was going to ask her to one dance, but he couldn't possibly do so, even on an "as friends" basis, because of the treacly, cloying, really rather frightening messages left by his usual and customary girlfriend on her Facebook page. And his. (Cue the music from the shower scene in Psycho here....)

Anyway, Younger Daughter had no date to the Fall Fling. And the last day to buy tickets to the dance was last Thursday. Besides, she had to work until 8:00 pm. Maybe after that she'd go to the football game at Notre Dame High School. Maybe. And Friday morning, by the time Younger Daughter left the vehicle, I had reviewed all of this information with her and confirmed she was not. going. to. the. dance.

She called about 10:30 am. From the bathroom because you're not allowed to use phones at school. And she doesn't have a cell phone either; she'd borrowed someone's. (And if you want to turn me into DCFS over this, go ahead. I think I'm safe: Nowhere in the Constitution does it say that every high school student must have their own cell phone.)

As soon as I figured out that it was Younger Daughter calling, and where she was calling from, she launched into a high speed spiel: Somebody had decided not to go, and was willing to sell her ticket to Younger Daughter and could she go, please? She could call so-and-so to cover for her at work and she'd already talked to her boss who said if so-and-so couldn't cover she'd still be able to leave at 6:00 and she had a group she was going with and none of them had dates either so it was all alright now, wasn't it?

I began making motorboat sounds: But, but, but, but.... I was feeling poorly to begin with -- nothing to bother Dr. A or Mother Jones RN with, but a trifle punk all the same. Sore throat. Stuffy nose. And it was Friday. I just wanted to go home and rest.

For you young people who have stumbled onto this page: Just wait. I used to love Fridays too.

Now, only bad things happen on Fridays: Clients want everything before the end of the week. Heaven forfend that the fax machine should start whirring late on a Friday afternoon. That could be an emergency that destroys the weekend. And fatigue cumulates during the week. I consider it a victory now if I can make it to the 10:00 news on Friday night.

But a dance? Noooooooo, dances are open-ended. Sure, they end at 11:00 or whatever, but then the group has to go out and eat. And Younger Daughter was saying something about going over to someone's house after that... and everyone was staying overnight... and could she do that, too, please?

You recognize the psychology here, of course: Make two unreasonable demands -- the dance and the sleepover... at the home of people I've never heard of... while Long Suffering Spouse is out of town and out of communication. By making two requests, she'd count on me to cut the baby in half, and grant one request.

I saw it clearly.

And, of course, fell for it exactly as designed.

I played one last card. "How will you get there and come back?"

Younger Daughter named a girl who lived in the neighborhood. She'd drive to and from. She wasn't going to stay for the sleepover either. And everyone was meeting at her house anyway.

I knew this wouldn't pan out. It never does, particularly with Younger Daughter.

But I caved. Perhaps if I'd been feeling stronger....

It's 1:00 am or thereabouts. I'm maneuvering around some pretty extensive police activity at a nightclub on Milwaukee Avenue -- several squad cars and one unmarked. There's blue shirts and tac team guys all over and I'm not at all interested in finding out why.

I'm on my way to an address in Old Irving Park, an area through which I drive on a regular basis, when I have to drive, as part of my traffic jam avoidance plan. (Whether it really works or not is not really the point; I think it does.) But I've never seen the street to which I've been directed.

I'm driving because a call came in from Younger Daughter around 11:30 or so, shortly before LSS and Youngest Son returned from the Dells: Younger Daughter's ride had fallen through. She'd call back around 1:00, but it looked like she might need a ride home after all.

I drive around the neighborhood in a criss-cross fashion, almost ready to conclude that no such street exists, when I find it: A dead-end, half-block long street off Pulaski. I can't see the street addresses on the houses, but one house is lit up in the back and kids -- girls and boys -- are running around in and out of the light.

I pull to a stop. Younger Daughter emerges from the front door of the house, carrying her dress, wearing a pair of gym shorts and a t-shirt she'd borrowed from the girl whose house this was. "What happened to the dress?" I ask, as she gets into the car.

"Dad," Younger Daughter says, as if addressing an imbecile, "everyone changes clothes after a dance."

They're staying at so-and-so's house three blocks away.

* * *
So how was the dance? Well, the girl whose house I'd eventually found did have a date. Of the "just friends" variety. And he and Younger Daughter hit it off quite nicely. I believe they were exchanging IM's last night. I don't know if Younger Daughter will be invited back....
Posted by The Curmudgeon at 9:06 AM

What a story. Good luck to Youngest Daughter.

well curmy that was very well written and it also seems the gods of the blogdom are letting me in here as well, glorious day all around.

and they really do grow up. and move out. and move away. far far away sometimes. and then sometimes you get sad and want to go through all this again.

What a great story. I use to live in Portage Park. Reading your story made me a little home sick. God, I miss Chicago. If I send you my address, will you mail me a Chicago pizza? All we have around here are crab cakes.

This post sent me scurrying, laughing all the while, to my 1940 edition Websters. "Forfend?" What a great word. May be the next likely post on Word Imperfect.

Great story. I am so glad I will be approaching/well into senility when Ben is this age.

And thank you for actually making me look up a word. You know how it is with lawyers and our aversion to actually looking anything up. Now we just post to the most likely listserve for an answer.

Nice story. As far as your cold, take two asprin and blog me in the morning...