Why the Irish wouldn’t have me

Imagine the near South Side of Chicago near the turn of the 20th Century. Maybe you think automatically of Finley Peter Dunne, who, as the fictional Mr. Dooley of the tavern on Archey Road, cracked wise on foreign policy and local politics for a national audience. But the neighborhoods must have been desperately poor and probably look far better through the filter of nostalgia than ever they looked in reality.

The streets of Chicago were teeming with newly arrived Irish immigrants, and among these were most (if not all) of my ancestors. When I was a little boy, my grandmother told me a story about how these people would find their proper place in society.

You have to understand that humans, like all apes, are social, hierarchical creatures: Apes groom their betters, and seek grooming from their inferiors. People need other people that they can look down on.

My grandmother told me that most of the new arrivals were from County Mayo. Of course she didn’t say County Mayo. She said “County Mayo, God help us,” as do most people of a certain age to this day. For the longest time I thought the proper name of the place was Mayo-God-help-us. 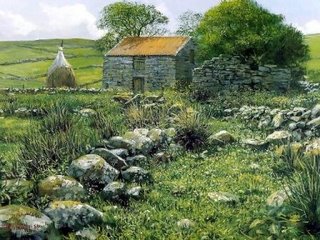 Mayo (God help us) was a poor place, my grandmother told me, full of rocks and failed farms. The big rocks became walls; the little rocks were moved from time to time for the planting of crops. People from there who made it over here were lucky to arrive with their skins intact; they had nothing else at all (at all).

The first thing that a new arrival would do, she told me, upon finding a place to stay in Chicago, was to go to Mass at the local parish – and look around, very carefully, to see if anyone was there from his or her home village. If he didn’t know anyone, he could invent a more prosperous past for himself and thereby acquire some sort of status over the neighbors.

The farmland in County Cork was much better than the worthless stones in County Mayo (God help us), my grandmother told me, so if there was no one in the parish who could contradict their story, the new arrivals would claim that their people were from County Cork. Sure, they still had no more money than his neighbors, she told me, but the neighbors would view the new arrivals with a measure of respect, because their relatives must be more well-to-do.

Even as a little boy, I knew the obvious question to ask: “Where were your people from, Grandma?”

“County Mayo, God help us,” she told me without hesitation.

“What about my grandfather’s people?” I asked then. My grandfather had died long before I was born. His father, the one who’d made the trip across, died, in Chicago, around 110 years ago.

My grandmother didn’t miss a beat. “From Cork,” she said.

Years ago, when I was working in a firm, we had a little boomlet of Irish immigrant clerical help. I would tell this story to each new hire in turn... and every one, without exception, looked at me liked I’d just escaped from the asylum. My story touched no mystic chord of memory; there was no spark of recognition. The story made no sense to any of them... probably because the country from which they’d come bore little resemblance to the country from which my ancestors emigrated. It was a different country, even if the name was still the same.

The bottom line here, though, is that I don’t know from where my ancestors came.

Oh, sure, you say, they probably all came from County Mayo (God help us) and, of course, you’d probably be right – but that answer would be, well, insufficient for the Irish.

Some years ago, when Cook County board members were still elected from either the City at-large or the county at-large, a friend of mine was a candidate. He was passing his leaflets out at the Irish American Heritage Center on the Northwest Side of Chicago. A group of older men at one table decided to engage my friend in conversation.

“Where are you from?” asked one, as my friend tried to press his leaflets on the little group.

He answered by naming his parish. In Chicago that is usually a sufficient answer: Even non-Catholics (“publics” as we sometimes call them – always, of course, with the greatest respect) would use the nearest Catholic church as the neighborhood landmark. That may not be as widespread a practice as it was... but for people of a certain age it is the only sure way of being understood.

But, this time, it was the wrong answer. The gentlemen at this table weren’t interested in where my friend the candidate resided (or at least his answer did not prompt further questions). So one of them asked again, “Where are you from?”

My friend understood, now. They needed to know where his people were from. “County Mayo, God help us,” he told them.

At this point, they regarded him with the pitying looks. Clearly, my friend was an idiot, and utterly incapable of answering even the simplest question. “No,” said one of the old men, speaking slowly now, lest by speaking any faster he might further befuddle my obviously feeble-minded friend: “Where. Are. You. From?”

Mayo, you see, was a given. They wanted the village. And my friend recalled that his grandfather had once told him the name of the village from where he’d come. My friend supplied the name. The old men beamed.

But I can’t name a single village. All I know is that my people are from Cork....

The Irish would never have me.
Posted by The Curmudgeon at 9:19 AM

LOVE that story (especially the God help us).

my Grandmother always enjoyed including "Jesus, Mary, and all the saints" in conversation.

oh good one curmy! very good one. me likey...

i have an ancestor from chicago also, well originally from italy, then new york, and FINALLY chicago. google him. he was my grandfather's brother. name: jim colossimo

there is a story there! but the final outcome is that the catholic church would not let him be buried in the catholic cemetary (he's in oak lawn) so the whole family became protestant. ever heard of anything like that? me neither. but it's an absolute fact my friend.

and thanks for the GREAT story. i learned something..... bee

A well told story there!

Bee -- the name Colossimo (or Colosimo) is not unfamiliar to me. The Church at that time was a little sensitive about people in certain occupations, if you know what I mean, and I know that you do.

In fact, not only would they not let certain people be buried in the Catholic cemetery, they would not allow a priest to say a funeral Mass.

I got this from a recent article by Tom Roeser about Cardinal Mundelein: "In early 1923, one Dion O’Banion, a former altar-boy turned prominent Outfit mobster, took a job in a florist shop across from Holy Name cathedral, at 738 North State Street, to add a touch of legitimacy to his work, the florist shop becoming a command center for the North Side mob. Someone from the Capone wing of the mob took umbrage at O’Banion and riddled his body with slugs the following November (a few bullets chipping the façade of the Cathedral).

"Outraged at the gang, Cardinal Mundelein ordered that O’Banion not be buried with the spiritual consolation of the Church since his life had been a public scandal. The O’Banion mob was disconsolate since religious burials meant very much to its members. O’Banion’s body was waked, then mysteriously disappeared, then reappeared at an out-of-the-way church in the suburbs where [a certain Fr. Patrick J. Molloy, known to his priest colleagues as Muggsy], offered requiem Mass, supposedly in secret."

But the Cardinal found out and exiled Fr. Muggsy to Panama, where he remained for 10 years. (I did mention that I was a history geek, didn't I?)

Anyway, colorful ancestors are part of the package when one lives in Chicago long enough. Once, at a family party, when I was quite small, I caught the eye of an elderly gent, who seemed greatly amused with me and favored me with a 50-cent coin. I didn't find out until years later that this nice old man was a stalwart of the Capone mob who'd married into some distant branch of my mother's family....