This really isn't a sequel to my earlier, similarly named post but it may become part of a continuing series in exploring the differences between the professions. Or not.

The first lawyer I worked for had the chiseled features of the movie star-fighter pilot variety; he'd actually been an aviator, I seem to recall, in World War II. He had a full head of sandy hair and was trim and muscular well into his 60's. He was a notable exception to a hypothesis I will posit here today: Male doctors tend to have full heads of hair, athletic builds, and look younger than their years; male lawyers tend to be bald, pudgy and look older than they really are.

Notice -- please -- that this hypothesis is limited to males. I may be stupid, but I'm not that stupid.

This hypothesis began to form nearly 30 years ago, when I was still in law school: I observed that all the males in our little study group, all of us in our early 20's then, were, uh, follically challenged. (Is follically a word?) I was a little less follically challenged -- then -- than some of my peers, so I prudently kept these observations to myself. Of course I've caught up since, too: It was distressing when Middle Son became taller than me and could see for himself that the top of my head has definitely arrived in the baseball cap phase of life. I tried to tell him I'd taken Holy Orders and undergone tonsure, but he didn't believe me.

The theory about male doctors didn't develop until I was practicing law and deposing doctors. I began to notice that all the male docs looked younger than me -- the me still in my 20's or 30's -- but were actually older. They all had hair. All of them were (apparently perpetually) tan, as if they'd just come back from an island vacation. I tend to sport a sickly gray or green pallor that comes from overexposure to flourescent lighting. 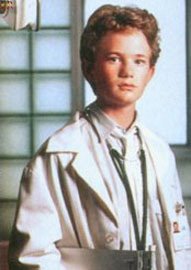 And then, in my late 20's, I had some health issues that required a couple of brief hospitalizations. At a teaching hospital. And the doctor who came by to take my history one morning looked pretty much exactly like this:

And that was my vivid impression then! I'm sure he'd seem much younger to me now.

I'm still trying to figure out why this hypothesis seems to hold up so well over time. My current theory is that it has to do with the training of interns: Only the strong and healthy types can endure the rigors of residency. Since they were strong to begin with, tney don't wear out quite as fast. And I just got back from court this morning, with this post half formed in my mind. And it was a long call besides. So I looked around the courtroom -- and, easily, the vast majority of male lawyers present were follically challenged. So I think the hypothesis is still valid.

Owing to the press of other business, I will be away from this site tomorrow and probably not back again until Tuesday, Monday at the earliest.

Sure, I can stop blogging any time I want. It's not that I'm addicted or anything. Oh, wait, that's encroaching Dr. A's territory, isn't it?
Posted by The Curmudgeon at 9:34 AM

Doogie Howser must be getting on a bit now. He must be at least 18.

I concur with your hypothesis-- 80% of the male lawyers (malyers) I know are follically challanged. It adds to that air of distinction. And they had better hope that their mother chose a middle name that is fairly distinguished, because they will all be J. Ezekial Doe, or possibly even B. Alexander Gates the III (but call him Trey, please).

Sorry about calling you crummie, it was a typo.

Oh, you're addicted alright. Acceptance is always the first step.

I guess I would agree with your hypothesis. No offence, but I haven't been around lawyers enough to really notice. Good call on limiting it to males. Almost really got in trouble there.

the more i kick this around in my head the more i am starting to like charlie's typo. look out!

are you back yet curmy? were you in that race i saw on tv? i thought i saw you running down the street!