More on running. Or not.

All of my children have been athletes: Even Older Daughter, who is the least athletically inclined of the bunch, earned a JV letter. Even if it was in badminton.

Oldest Son and Middle Son played football and baseball throughout high school; Middle Son continues to play baseball in college. And Middle Son, in high school, was the one who looked most like I did when I was that age: Tall and weighing about as much as a sack of groceries. Which, come to think of it, is what Middle Son consumes at almost every meal when he's at home.

So I wasn't the fat kid who always finished last in the mile run in high school gym class.

No -- I was the tall, skinny kid who battled it out with the fat kid for last place.

And yes, just like in all the silly movies, there was always a fat kid in gym class. As I recall, I sometimes even beat the fat kid. (If the fat kid remembers differently, he can get his own blog.) Either way, our epic battles for last place were greatly amusing to the vast majority of our classmates, all of whom were finished, rested -- maybe even showered and dressed -- before we last two came plodding around that final turn. And, no, I wasn't a smoker.

It seemed like this must have happened three or four hundred times during my high school career. But that number may have been inflated by the subsequent nightmares.

Somehow (and I presume it's because my wife's genome overwhelmed my skinny little DNA), my kids can all run. Younger Daughter has been hobbled by shin splints. But she even likes running, when she can. Older Daughter has had a variety of foot problems and maybe she's the exception to the rule. But, with that possible exception, I could see any of my kids someday training for a marathon. 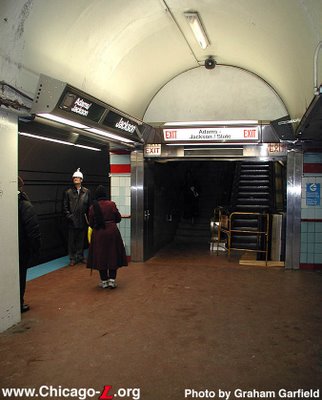 Shown above is an older photo of the Jackson Red Line subway stop. It's been remodeled since then. But the key feature of the photograph, for our purposes, is that yellow railing, blocking the escalator. Meaning the escalator is out of order.

This happens far too often. Mind you, I can get up these stairs if necessary. What gets me is when the next escalator, from the subway station to the surface, is also kaput. Then come the leaden legs. And the spots.

For years I had an office in a four story building. My office was on the third floor. We had no elevator.

It was an older building, with a lightwell in the center. An elevator could have been installed there -- and the morbid joke among those of us who worked there was that an elevator would be installed there someday -- with a suitable memorial plaque dedicated to the first of us to drop dead going up the stairs.

But I never made it from the ground to the 4th floor without pausing.... for awhile....

* * *
I suppose I could leave you with an old favorite quote, "I get my exercise acting as a pallbearer to my friends who exercise." Today, the Internet attributes this quote to former U.S. Senator Chauncey Depew (1834-1928); it seems to me I've seen it attributed to others as well.

But instead I'll leave you with a quick story.

In the mid-70's my late father was required to submit to what was called an "executive physical."

My father regaled me with an expansive description of the doctors' beautifully appointed Michigan Avenue offices, the deep carpets, the plush furniture, the soft lights, the tasteful artwork -- inadequate compensation, separately or together, my father said, for the poor doctors who were obliged to spend all day sticking their fingers into places on the bodies of middle-aged men which were ordinarily designed solely for egress. (It was the mid-70's. The executive clientele were overwhelmingly male.) 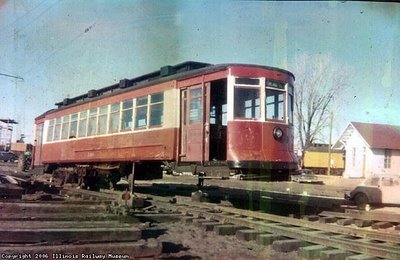 In the course of the examination, the doctor asked my father if he ever got winded or short of breath while running.

"Really?" said the doctor, showing some interest now, with pen poised to record the details on the chart.

"Yes," my father said, "I was running for the streetcar one day. And I made it, too, but when I got there, I was short of breath. So I didn't do it again."

The doctor looked confused. "Sir," he asked, "don't you mean a train? Or a bus? There haven't been streetcars in Chicago since the late '40's."

* * *
Whatever you think of my little story, think kind thoughts about me tomorrow: I have promised to accompany Younger Daughter to the local outpost of the Secretary of State, there to take... the driving test.
Posted by The Curmudgeon at 11:57 AM

oh well, there goes the neighborhood! (just kidding) remember how scared we were when we took our driving test all those years ago? i passed right away and i think my parents were disappointed. we only had one car in the whole family and of course now i wanted it. being an only child, i sometimes got what i wanted. not that time though. sigh.... good luck! bee

I'm walking "the streets of San Francisco" and I'm not doing that well here. Even 26.2 yards is tough for me in this city. Sheesh!

now curmy, you MAY want to not go look at my little history lesson of saturday. i mean you being a historian and all, you may have a few things to say. now i probably will not agree with you or you with me, but i'll still defend your right to think what you want with my very life..... even if i think you are wrong, okay? bee

The escalators are always kaput at our local station as well.

well curmy you were certainly a gentleman in that comment, very kind and galant of you sir....
i wouldn't mind reading a post sometime on your take on it.... historian that you are.

Good luck with the driving test!!

I'm not a runner, either, though (sometimes) I try.