...although, if absolutely necessary, we may resort to walking at a brisk pace. 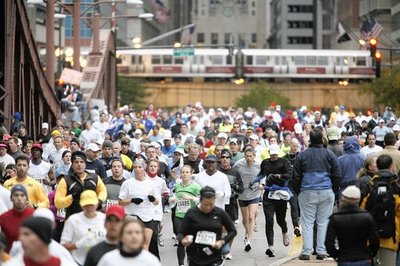 Image captured from the Chicago Tribune.

Thus you would search in vain among these hardy runners in last Sunday's Chicago Marathon for even the smallest glimpse of yours truly.

Here is a less than flattering photo of the winner of the mens' competition, Robert Cheruiyot of Kenya. This image is captured from the Chicago Sun-Times: 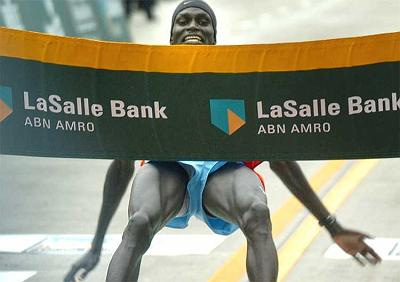 Mr. Cheruiyot was hospitalized as a result of a head injury sustained in this fall, but he has recovered.

Even with this mishap, Mr. Cheruiyot fared far better than did Pheidippides, the Athenian hero, who, in 490 B.C., according to legend, ran from Marathon to Athens to report the victory over the Persians in the Battle of Marathon. The story goes that Pheidippides reached Athens and announced the victory -- and died on the spot.

Wikipedia, darn them, says that there is no evidence to suggest that this ever happened... but I say: Why take chances?
Posted by The Curmudgeon at 11:04 AM

i really thought i saw you in the race on tv. anyway, about that second picture of that guy falling, well, hmmm, how do i ask this tactfully? is something showing that shouldn't be?

oh MYYYY! Empress Bee, you may be on to something!!

Start practising; everybody wants to see you!

And as for "training," CMHL and Jean-Luc, I hope to talk about that later today, now that I seem to have resolved the latest bout of technical difficulties.