Frivolous Friday: Everything I need to know I get from the comics, part 4,794 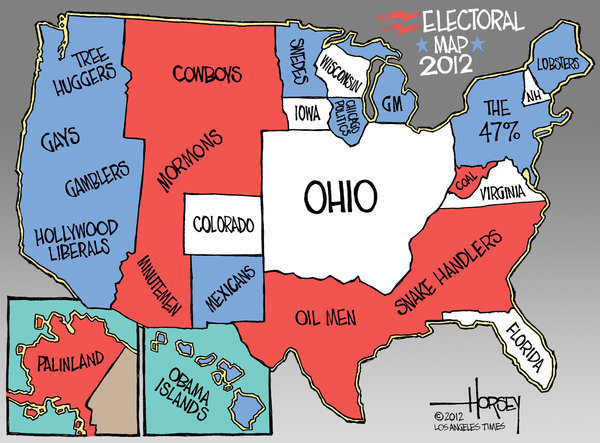 I saw this David Horsey cartoon on Facebook this morning; here is a link to Mr. Horsey's cartoon and the column he wrote about for the Los Angeles Times, "Campaign 2012: All voters matter, but Ohio voters matter the most."

I am so glad I don't live in Ohio right now.

Meanwhile, over at Pearls Before Swine, recovering lawyer Stephen Pastis has been exploring the comic potential of lemmings leaping to their deaths.

You never envisioned suicidal lemmings as a comic gold mine?

Tim Rickard's Brewster Rockit strip has hapless Brewster debating the evil Dirk Raider again in their long-running campaign for President of the Galaxy.

Fair use, I hope, to pull a few strips from this week's entries. In the first, Brewster is getting coached for the debate.

Unfortunately, the good advice is misunderstood....

The important thing to remember is that this is just a comic strip, having absolutely no similarity to anything that might be going on in real life right about now.

And, finally, we have this installment of Real Life Adventures, by Gary Wise and Lance Aldrich, from earlier this week.

Kind of hard to argue with the father's conclusions here. Which means that, if there were even a molecule of truth to it, TV's awful Ancient Aliens would be about galactic idiots. Who came to Earth long ago to share their distorted "wisdom." Whose lessons we have learned too well (in other words, we're idiots, too). Which gets us back to the very first cartoon in a way, doesn't it?
Posted by The Curmudgeon at 10:10 AM

Yes and I do live in Ohio. I cannot tell you how happy I will be when this election is over. Every other day someone is here, or close to here, or gonna be here tomorrow. Paul Ryan was here and so close to my home I could look out an upstairs window and see the podium he stood on. He got a small reception and over HALF of them came from some where else on a huge bus that went right past my house.At the most there was a cpl hundred people and we all laughed when the news reported that night that he had shown up to a crowd of thousands. It was comical (in a sad sort of way) that the food kitchen here, for the homeless and elderly, literally closed early and they all left and locked up because they were afraid he would come there for another photo op. My DIL volunteers there a cpl days a week. Just today I had 7 ADs in my mailbox. 3 of them were identical and six were from the same campaign. All this and I have already voted. For me it's over, wish they would now leave me alone.