Well, this has been an unfocused week here at Second Effort: A family story, a computer gripe, personal angst, and outrage at the Taliban. How can we tie this all up, neat and tidy, for a Friday?

You're looking at an artist's depiction of NASA's Mars Rover, Curiosity, as it rolls around the Martian landscape testing rocks and looking for signs of life.

This isn't an actual photo, of course, because -- at least as far as we know -- there's no one there to snap the rover's picture.

But we have to hedge here. The Huffington Post is reporting that Curiosity has found a "shiny object" in one of its first probes of the Martian surface. Herewith the object:

No, take a look again. You'll see it. There's a speck here that clearly does not match the surrounding dirt.

The linked HuffPost article says NASA scientists are not yet ready to say what the speck is -- but they're pretty sure it didn't fall off the rover or the lander that brought the rover to the surface. It appears, they say, to be of Martian origin.

Some dumb Martian may have left a gum wrapper behind. Littering may be a universal constant. But did Blxrrszt leave that there recently... or many millions of years ago?

Or maybe it's a piece of plastic from an ancient Martian landfill. That stuff never breaks down, does it?

Here is a story to watch with great interest.

But in the meantime, does anyone else notice the similarity between Curiosity and these two Hollywood space robots? 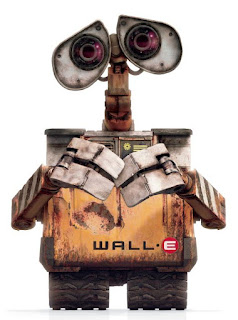 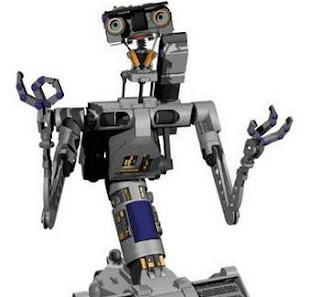 Johnny 5 from Short Circuit and WALL-E from, well, Pixar's WALL-E, bear a distinct resemblance to NASA's Curiosity, don't you think? Is this an accident? I think not.
Posted by The Curmudgeon at 9:56 AM