All this fuss over Big Bird is pretty silly... but, on the other hand....

Oh, sure, the first presidential debate of the 2012 silly season is ancient history now. It's the Ryan-Biden debate that the chattering class are focusing on now.

The spinning is so silly: Basically, the Democrats are trying to lower the performance expectations for the Vice President to the point where, if he faces toward the camera and gets through the entire thing without wetting himself, they can declare some species of 'success.' Meanwhile, they build up Paul Ryan as a seasoned debater, not just Darth Vader in an open-necked shirt, but the sort of verbal opponent who uses words like an expert dueler might have used a rapier once upon a time in Heidelberg: If Ryan does not physically scar Biden, or send him screaming from the stage, then (according to the spinners) Ryan will have 'lost.'

I'm all about equal time. I'd tell you how the Republicans are spinning the debate tonight... but I live in Chicago, Illinois. We don't have a lot of Republicans around.

But, in the time-honored history of this blog being a step behind everyone and everything else, let me weigh in on Big Bird. 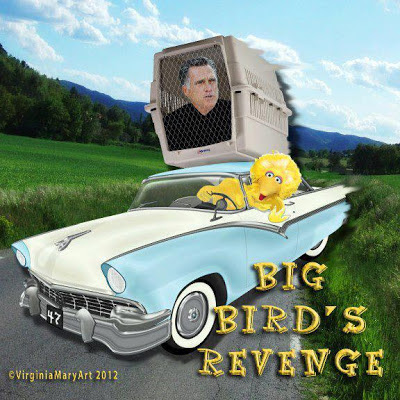 I didn't get all huffy at cartoons like this one (that I saw recently on Facebook; I believe the copyright of the cartoon creator is indicated on the image itself). I was amused by this cartoon and some of the other Photoshop creations -- Hilary Clinton hustling Big Bird to a safe house, Big Bird saying that Sesame Street is brought to you today by the letter "O" (for Obama), and so on and so forth. 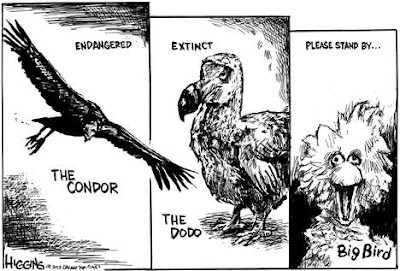 But this Jack Higgins cartoon in this morning's Chicago Sun-Times finally got me going. Maybe I still -- deep down -- have some lingering belief that print is more important.

Yes, Gov. Romney made some remark about in the debate about cutting public funding for PBS -- not that it gets so much any more anyway -- and such a cut sure wouldn't balance the budget, not even if multiplied a thousandfold -- but the immediate hue and cry that Romney was out to kill Big Bird was simply silly.

Big Bird and the other beloved Sesame Street characters are owned by the Sesame Workshop (formerly the Children's Television Workshop). Remember the Tickle Me Elmo craze of a couple of years back? The Sesame Workshop is a not-for-profit corporation, but surely it could make big bucks if it had to. I was actually surprised to learn today that Sesame Workshop receives so much of its income from 'corporate, foundation, and government' support:


A very quick and uneducated look through the financials that are available via the page linked above, however, suggested to me that it will not wink out of existence even if a Romney administration refuses to provide further Federal funding for PBS.

And I was feeling pretty smug about my resolution of this tempest in a tea pot, when I saw another picture on Facebook. 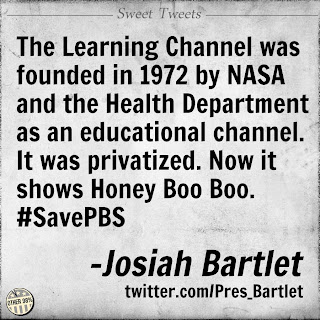 Specifically, I found this picture, of a Tweet, claiming that, once upon a time, The Learning Channel was founded by "NASA and the Health Department as an educational channel."

Then it was privatized.

That was scary stuff -- and couldn't possibly be true, I thought -- so I dialed up Wikipedia.

According to Wikipedia, "The channel was founded in 1972 by the Department of Health, Education, and Welfare and NASA as an informative/instructional network focused on providing real education through the medium of TV; it was distributed at no cost by NASA satellite. It was privatized in 1980 and was then named the Appalachian Community Service Network. In November 1980 this name was changed to 'The Learning Channel', which was subsequently shortened to 'TLC.'" It was thereafter bought by, and is still owned by, Discovery Communications.

And TLC really has given us Honey Boo Boo.

Suddenly, I'm not so smug anymore.
Posted by The Curmudgeon at 1:21 PM