"Bozo's Circus is on the air!"

Über-blogger Ken Levine describes his recent trip with the Seattle Mariners (he broadcasts for the team part-time) in blog posts today and yesterday. Levine's post this morning included this remark, and it got me to thinking:


Hawked my book [The Me Generation... By Me] on the WGN-9 Mid-Day News. The station is God knows where. Certainly the cab driver didn’t have a clue. Drove by Wrigley Field and I think Wisconsin.

Neither Levine nor his cabbie were Chicago natives. Growing up in Chicago in the 60s kids learned two addresses -- their home address and WGN's -- and not necessarily in that order.

2501 W. Bradley Place was the address for the postcards that kids sent in hopes of becoming the 'at home' player on The Grand Prize Game -- a daily feature of Bozo's Circus (in those days, a live TV extravaganza, with Ringmaster Ned and Bob Trendler and the Big Top Band). Creaky old Vaudeville animal acts -- and some creaky old Vaudeville sketches -- were part of the package. And, however creaky and old some of the bits were, they were all new to us kids. There were cartoons sometimes, too.

Kids could go home from school for lunch in those days and that's when Bozo was on. My mother would have sandwiches waiting and we'd watch the show. Because the show was live, there was a lot of spontaneous ad-libbing -- not all of it suitable for (or aimed at) children. My mother watched that show long after all of my siblings were grown.

The show was put on before a live audience and tickets were impossible to come by. Engaged couples would register for china patterns and Bozo tickets. Maybe the tickets would come in time for their kids to use. Maybe their grandkids. That's why kids send in so many postcards to be at-home players in the Grand Prize Game. After the "magic arrows" picked the day's lucky contestants Ringmaster Ned would shout, "Let's go over to the Bozo Drum!"

The Bozo Drum was a giant, hollow monstrosity. It looked like a Ferris Wheel, only a little smaller. The sides were clear so we could see all the postcards inside -- and it was stuffed. There was a little door in the side of the drum. The day's contestants would reach in and choose the at-home players -- the boy would pick a boy's card, the girl would pick the girl's. When the boy picked a girl's card, Ringmaster Ned would pluck it from the kid's hand and tell him to plunge in again.

The Grand Prize Game itself involved tossing a ping pong ball into each of six painted garbage cans. It was harder than it looked: Even if one's aim was true, that darned ball might bounce out. And the pressure increased with each bucket: Kids got bigger and better prizes with each bucket safely reached (and the at-home players got duplicates). For years, the game would start with Ringmaster Ned pulling out a shiny silver dollar and letting one of the kids put that in Bucket No. 6. The pot would roll over every day. And a new bicycle awaited that lucky kid who successfully reached Bucket No. 6.

Those few kids who did beat the Grand Prize Game had icewater in their veins. They're probably cleaning up today on golf courses all over the country.

I never got to play the Grand Prize Game but I did get to go to Bozo once -- and I even got picked for a tug of war contest. Ringmaster Ned asked my name and everything -- but I must have mumbled because he called me by the wrong name. And my team lost the tug of war. Still, I was rewarded with a genuine Bozo decal. It was stuck to a dresser for years before some Philistine painted it over.

Fast forward nearly 50 years. Earlier this year I had to be at WGN for a political show (OK, I didn't have to be there; I was on the list to get by security because I'd arranged for one of the show's actual guests to be there). Anyway, on my way to the newsroom, I got to peek inside the old Bozo studio -- much of the set is still there -- and I was instantly transported. Hey, the newsroom was interesting, too -- but I saw the Bozo set. 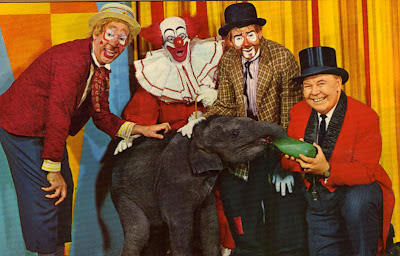 Posted by The Curmudgeon at 9:50 AM