I'm not deaf, darn it, but my hearing has changed

For many years I used to grumble about judges who were so insistent about absolute silence in their courtroom. I'm not talking about talking during an opponent's closing argument to the jury -- I could always understand getting riled up about that -- but, you know, on the morning motion call, when relatively routine, mundane business is being transacted before the bench and the room is chock full of lawyers trying to streamline their pending appearance. You get a crowded courtroom full of lawyers whispering, "Yes, I know I owe you written discovery. Can you give me 28 days?" or "The doctor's on vacation and we can't schedule her deposition until a week from Monday when she returns," and the buzz can get rather, well, buzzy.

But no one person is being intentionally disruptive; everyone is trying to be as quiet as possible and the parties the judge actually needs to hear are right in front of the bench. So I used to take umbrage when the learned judge would "shush" the room, or ask the deputy to do so. What's the matter with the judge? I'd think to myself. Is the judge so unable to focus that he or she can't hear the persons standing right there?

But now, finally, I understand: The answer is yes, the judge is having trouble focusing on the parties in front of the bench when the room gets too loud -- not because of ADHD but because the judge literally cannot focus on the conversation in front of him or her when there's too much ambient noise.

It's happened to me. 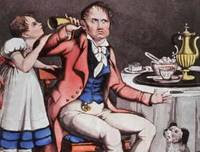 In a restaurant, or at a social function, I can't hear the person right next to me because I hear too much of the the noise around me. I'm not deaf, but I seem to have lost the ability to zoom in on the sounds I want to hear and exclude the rest. It was always the case that, in a crowded bar, if the band was too loud, I'd have trouble picking up conversation around me. But that was long, long ago and everyone has trouble hearing beyond a certain ambient noise threshold. It's just that, as I've aged, that threshold has clearly been lowered.

Long Suffering Spouse would disagree, of course. She thinks I'm deaf as a post. But if she's saying something in front of me and the TV is between us -- or sometimes even with the radio too close to my ears behind me -- I can't pick up what she says.

Of course, sometimes I wasn't listening because I was watching the TV or listening to the radio and because sometimes Long Suffering Spouse talks to herself as she gets things organized. I can't always tell the difference when she stops talking to herself and starts talking to me. But I sure do hear about it.

Eventually.
Posted by The Curmudgeon at 8:55 AM

My hearing is slipping with age too! However, the people who truly annoy me still register loud and clear. How does that work?

Well don't wait to long to get something done about this. I started losing my hearing very early. It became obvious to me in my 30s but I ignored it. I let it go way to long with trying to guess at what people were saying and many times answering questions that wern't even asked....I am now 60 and for the very first time I had my hearing checked last year.

The poor guy at Beltone was so floored at my results he refused to make me hearing aids until I had medical clearance from an ENT specialist. That in turn led to the ENT sending me to his own doctor of audiology and the results were that I was completely deaf in my left ear and only had 30% word recognition left in my right ear. Then I had to have an MRI of my brain to rule out any tumors as this type hearing loss is consistent with tumors.

I now have hearing aids in both ears but the left one is used only to balance out what I hear in the right ear. The longer you let this go the worse it will get and in your line of work you need to hear. In fact I have a story pertaining to your line of work.

About 5 months ago I got a notice for jury duty.Remembering that the audiologist and ENT doctor had both told me that even with my hearing aids my hearing was still not at all good and nothing would help the deafness in the left ear. I contacted the court about this. Well it turned out they made me a face to face appointment with the judge in his chambers. So he and I had a sit down talk and he was very very nice to me. End result was that he dismissed me from jury duty and told me if I should ever get another notice to do exactly what I did this time because no judge would let me sit on a jury with my hearing this bad. I suppose it's pretty important that you hear all words spoken if on a jury and since I miss many words in every sentence I wasn't a good candidate. BTW my hearing aids are so small that no one can even see them unless I take them out and show them.

I think the key point lie's herein Quote " I can't always tell the difference when she stops talking to herself "!! You must get her to announce "I've stopped talking to myself now" Good Luck with this :) lol