People were celebrating or denouncing yesterday's decision in National Federation of Independent Business v. Sibelius according to their preconceived prejudices.

Fox viewers were outraged. I got an email from one right-wing group which began, "The U.S. Constitution died today." Kentucky Sen. Rand Paul (son of Ron) said "just because a majority of the Supreme Court declares something to be 'constitutional' does not make it so."

CNN viewers were simply misinformed -- at least for awhile. 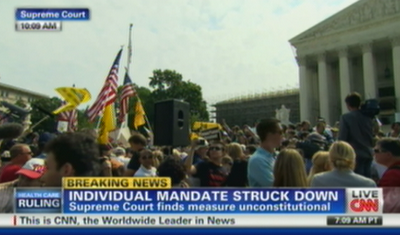 Actually, according to the linked post on Constitution Daily (from which the image was grabbed), Fox viewers were also initially told the mandate was thrown out. Presumably Fox is not getting flak for this screw-up because no one necessarily expects Fox to get the facts right in the first place.

But let's see where we are now: Congress passed a lengthy law that most of its members didn't read (remember how quick the final product was rammed through?) which the Supreme Court has now upheld on grounds different from those urged by the Administration in support of the law.

Five members of the Court did in fact reject the Administration's attempt to justify the mandate that all Americans must buy insurance or pay a 'penalty' as an impermissible distortion of the Commerce Clause. Chief Justice Roberts, however, said that -- whatever the Obama Administration might want to call it -- the mandate is a tax, and Congress does have the power to tax persons who don't buy insurance.

The American people have already gotten the goodies that Obamacare has to offer. My family is already benefiting from the requirement that kids be carried on their parents' health insurance to age 26. My unborn grandchild needs that assistance because her parents don't yet have health insurance of their own.

But... let's think a moment about this, shall we?

What incentive does any employer have now to provide insurance for employees? The mandatory obligation to provide insurance is on each individual, not on employers. Companies that have more than 50 employees will also be penalized for failure to provide insurance starting in 2014 -- but the penalty is only $2,000 for each full-time employee. I stopped paying individual Blue Cross premiums when my wife went full-time with the Chicago Catholic school system. That was about seven years ago -- and I was paying $10,000 a year then. Do you think premiums have gone down since?

Yes, the premiums paid for employees are deductible expenses, but administering health insurance plans for workers can be a real hassle. There will be paperwork either way (I'm sure) but if there's such a per capita differential between the cost of insurance premiums on one hand and fines on the other, wouldn't it be prudent to choose the fines? And smaller employers will not have these concerns. Without new and better incentives to do otherwise, lots of employers, big and small, will probably drop employee insurance as a benefit.

Hopefully, this won't happen overnight (or overnight in 2014 when most of the Obamacare provisions kick in) -- but isn't this going to happen?

Insurance stocks are up in the wake of the Supreme Court decision, too. True, under the new law, they can't turn down customers because of pre-existing conditions. Presumably they now should look forward to all sorts of new, and largely healthy, customers.

But they have a captive market. True, Insurance Company A can compete, in theory, against Insurance Company B on price and service -- but are they really going to beat each other to death knowing that everyone must buy their product, no matter what?

Is this really going to contain health care costs?

Big Business, doctors, hospitals, insurance companies, pharmaceutical companies -- all these had input into Obamacare. The elected representatives of the people -- the sad sacks we call Congress -- were presented with a fait accompli and voted for it, or against it, according to party loyalty.

Brace yourselves, ladies and gentlemen: The unexpected consequences of this one are going to be really, really severe.

And here I thought I was the only one muttering about "Imponderables" on this deal.

Might just be my cynical, suspicious nature coming to the fore, but I can't help but feel like a sheep that just handed a signed blank check to the wolves and said, "There you go! You're going to make everything awesome now, right?"

Your site is really good and the posts are just wonderful. Thank you and keep doing your great work.